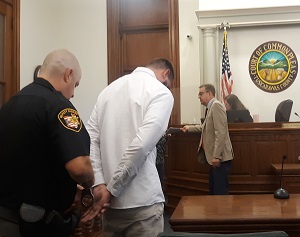 Mary Alice Reporting – A mandatory prison sentence was issued for a man who killed another after fleeing from police.

After entering a guilty plea, Larry Short, of Uhrichsville, is heading to prison after his Wednesday morning hearing on charges of aggravated vehicular homicide, vehicular assault, and failure to stop after an accident.

Last August, Short attempted to flee from law enforcement, and during the pursuit, he went through a stop sign and hit another vehicle. This caused injuries to all parties, including 22-year-old Joseph DeMattio, who went into a coma until he died in December.

At the hearing, the victim’s mother spoke.

“What I want Mr. Short to understand is how making that quick and selfish decision, to drive fast away from the police changed so many lives. Please take these next few years, please, to think about those things and try to change your life for the better because at least you can.”

Short also chose to speak, talking about how drugs, alcohol, and surrounding himself with the wrong friends had affected his life, something he has been changing for the past year.

“And I am fully aware that I must take responsibility for the regrettable decisions I’ve made. If I could go back in time and trade places with the victim I would do exactly that. I also understand that simply saying I’m sorry for the mistakes I’ve made and the pain I’ve caused [for Mr. DeMattio’s family]. I hope to one day prove how genuine my words actually are.”

Short will be in prison for a mandatory four years, with a two-year tail. For failing to stop, 30 months was imposed but consecutively. He will also have to pay a little over $4,000 in restitution.