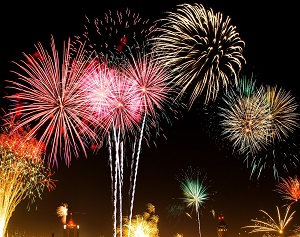 Mary Alice Reporting – This weekend is the July 4th holiday and firework festivities are planned.

Independence Day commemorates the July 4, 1776 passage, by the Continental Congress, of the Declaration of Independence.

Among the different local events, New Philadelphia’s First Town Days Festival starts today (Thursday) at Tuscora Park as the midway opens at 4 pm but the official opening ceremonies don’t happen until 6 pm. The festival continues through Monday but a few highlights include Friday’s parade starting at 6:30 pm and the fireworks display scheduled for Saturday night at 10 pm.

Down to the Village of Gnadenhutten, despite storm damage, their fireworks festival is still happening but it has been moved to the Town Hall area, says Mayor Rich Gilmore.

“We had to do some changes. Decided we’d move everything downtown. We put some new electric boxes in for our food trucks. It’s going to work out. We’re going to block off E. Main Street with the food trucks, have a new parade route going downtown [as] we decided to start it off down at the high school, bring it up Walnut Street, and out [Tuscarawas Avenue E], and turn to left and send everybody out of town.”

Country Fantasy in the Sky fireworks display returns Saturday, at 10 pm, and will be done at Stocker Concrete with a synchronized soundtrack heard on 99.9FM.

Meanwhile, the Muskingum Watershed Conservancy District is hosting Fireworks Over the Lake, at Atwood, where the light display can be seen from land or the water, starting at dusk this Saturday.

Another spectacular fireworks show will be Sunday evening at Midvale Speedway. The Firecracker 150 Classic starts with racing at 6:30 pm and fireworks will follow after dark and dependent upon the racing program.