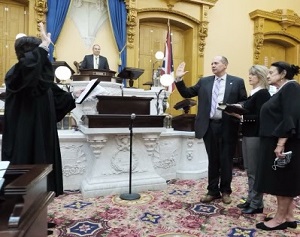 Nick McWilliams reporting – As members of the 134th General Assembly took their oaths of office at the Ohio Statehouse Monday, local State Senator Jay Hottinger took over the role of President Pro Tempore.

Hottinger, who hails from the 31st District that oversees Perry, Licking, Holmes, Coshocton and Tuscarawas Counties, is entering his 13th year in public office, including stints on Newark City Council, as a state representative, and now the Ohio Senate.

The leadership role will put Hottinger at the head of the chamber as the second-highest ranking member.

According to a release from his office, Hottinger hopes to bring positive impact on legislation in the state.