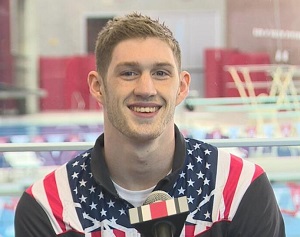 Nick McWilliams reporting – Hunter Armstrong is set to return to Ohio as an Olympian, excited about the prospect of returning to the Games in three years with the Dover community cheering him on.

The Ohio State University swimmer who competed with the Tornadoes and Coach Brenda Wherley just a few years ago finished in the top-10 of all competitors, making him one of the elites in terms of the men’s 100-meter backstroke.

While that performance alone was worthy of praise, Armstrong was humble talking about his final standing, noting he felt he missed a few small details in the semifinals.

“It’s hard to be upset with how the year went, [but] I can be upset with the way I swam. I missed the wall in prelims, and didn’t swim it correctly as far as race strategy in semis. But at this level, everything has to be perfect, and I’m just not quite there yet.”

An eight-time All-State swimmer at Dover, Armstrong started his college journey in West Virginia before transferring to Ohio State, where he was a part of a third-place finish in the Big Ten Championships.

That collegiate success and now Olympic glory was almost missed, with the 20-year old saying that he almost hopped out of the pool for good before going off to college.

“You may or may not know, I started swimming long course [and] I think my first meet might have been the end of 2017, but I started to take it seriously about halfway through the July of 2018 around July. But before that, I wasn’t even sure if I wanted to swim in college. I kind of thought high school was sort of it. State’s was as high as you can go.”

Missing out on the final swim by such a small margin, Armstrong pulled no punches when it came to his performance, still proud to say he found himself among some of the best in the world.

Moving forward, he’s keeping his sights set on a second run at the Olympics, with three years to prepare for Paris in 2024.

“I didn’t expect to make it. But the fact that I did shows that there’s a lot more room for improvement once I can put in the same amount of work [as others,] and I’m able to perfect my race as well.”

Armstrong’s swim in the Trials came in at a personal best 52.48 seconds, which is the fifth-fastest time when compared with the marks in the Olympic finals.

He gave credit to the likes of teammates Ryan Murphy, Caeleb Dressel, Bowe Becker, and Zach Harting for their mentorship and friendship, adding they’ve played an integral part to his growth as a swimmer and person.

He’s expected to return to Dover soon, with all intentions on diving right back in.