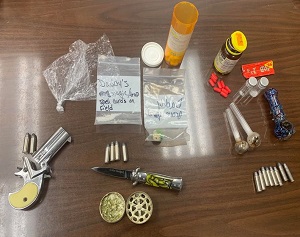 Mary Alice Reporting – An early morning arrest was made by the Uhrichsville Police Department with illegal items and other inventory found.

Around 2 am, on Monday, a male subject was located by a police Sergeant and Patrolman and he was arrested due to several outstanding warrants.

A search was conducted of the vehicle, netting a loaded firearm that was reported stolen from a neighboring county, ammunition, five containers of suspected crystal methamphetamine, and other illegal items including drug paraphernalia.

The man is a convicted felon, which bars him from possessing weapons and ammunition under a civil protection order.

Also found, in the vehicle, were more than a dozen vinyl records, some of which were autographed, and the Uhrichsville police are asking anyone who may have recently had records stolen or any gone missing to contact the department at 740-922-1212 to check for a possible match.

It is unknown if the man is responsible for any thefts.