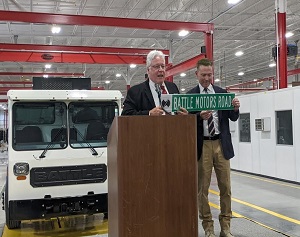 Nick McWilliams reporting – Following the acquisition of the former Crane Carrier Company, Battle Motors has unveiled their latest investment in New Philadelphia and the next era of industrial vehicles.

The California-based manufacturing company was looking to ramp up the production of what they are calling the future of trucks with more compressed natural gas (CNG) and electric vehicles, and did so with a plant expansion that took the New Phila complex from 125,000-square feet to 325,000.

Founder and CEO Michael Patterson had high praise for the project being completed on time, with Battle currently shipping eight to nine trucks off their line each day, and said that the chance to jump almost completely across the country was driven by a changing world

“It’s inevitable at this point. We just hit the, I believe, five-percent mark of all new cars that are sold are [electric vehicles.] Now it’s going to go really fast. It’s a great drive. They drive great, and the acceleration is great. The price of gasoline as you have probably noticed is up there, even though it’s been falling the last 70 days or so. The customers want them.”

Patterson says that the company has quick turnaround times compared to other manufacturers, thanks to the electric components being used on diesel chassis that are already 80 to 85-percent built.

The multi-million dollar investment has received praise from Mayor Joel Day and other city leaders, who toured the facility and met with some of the executives of Battle.

Day said that the city is offering full support of their future plans, and praised the company’s founders and employees.

“I want you to realize that you are part of the Industrial Resurgence in our community and in our country. Made I America is back. And because of your hard work, skill, and ingenuity, there is no doubt in my mind that soon, Battle Motors and the quality of its vehicles will be known and in demand throughout the United States and the world.”

The New Phila mayor also present Patterson with a new street sign for the entrance of the plant, which will now be known as Battle Motors Road.

Recently, the company announced $150 million in new growth capital, which comes off a previous $120 million investment in December of 2021.

Currently, the company is working with 750 municipal customers with the electric truck in the United States and Canada.