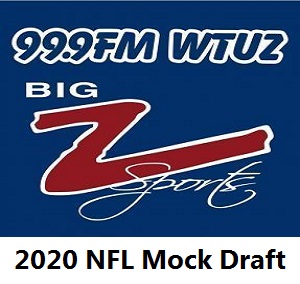 The Pittsburgh Steelers traded their 2020 first round and fifth round draft picks for proven second year Safety Minkah Fitzpatrick last September. Minkah was the 11th overall pick in 2018, so in reality, they got to see their 1st round pick play for a year in Miami, before drafting him. But, there is some talk of the Steelers trading back into the first round. So, that is where I will go with my Mock 2.0.

The Steelers trade JuJu Smith – Shuster, Vance McDonald and their own 4th round pick (#135) to the New York Jets for the 11th overall pick.

The Jets only have 6th-year pro Jamison Crowder, 5th-year journeyman Breshard Perriman and 6th-year man Quincy Enunwa on the roster at WR and they really have no TE’s worth mentioning. Perriman had a career year with Tampa in 2019. He had 36 catches for 645 yards and 6 TD’s. Enunwa was out after the opener with a season ending neck injury and is questionable for 2020. Crowder had the best season of the 3 in his 1st year with the Jets. He had 78 catches for 833 yards. They need help for Sam Darnold and Le’Veon Bell, and they need it badly.

JuJu, who is in the final year of his rookie contract, only played 12 games in 2019. But, in 2018, he had 111 catches for 1426 yards and 7 TD’s. He is a UFA in 2021, but is a proven weapon. McDonald can be very explosive and reliable if he is healthy. He will be in his 8th season. His best season was 2018 with Pittsburgh, where he caught 50 balls for 610 yards and 4 TD’s. The last 2 years of McDonald’s contract are Club options, before becoming an unrestricted free agent in 2022. The acquisition of Eric Ebron made Vance expendable.

So the 2020 Draft for the Black and Gold will look like this: