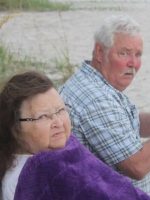 Al was born January 6, 1945 in Davy, West Virginia to the late Bryant and Tina (Rakes) Fanning, Sr. He was an employee of the Cleveland Water Department until his retirement.

Judy was born November 9, 1941 in Springerton, Illinois, to the late Raymond and Helen (Pilcher) Taylor. Judy received her LPN certification and shared her talents with the Tuscarawas County Home where she was employed until her retirement.

Al and Judy were blessed to find the love of their life and were wed in September of 1990. Together, they were members of the First Apostolic Church in Cadiz where they were active members. They also enjoyed days on Tappan Lake boating and fishing. Most importantly, they were devoted and loving parents and grandparents.

In addition to their parents, Al and Judy were preceded in death by Judy’s infant daughter, Sherry Kimbrell.

A private graveside service remembering Al and Judy will be held in Sandy Valley Cemetery this week.

Memorial contributions in their memories may be directed to either the Alzheimer’s Association (www.alz.org) or the Leukemia & Lymphoma Society (www.donate.lls.org).