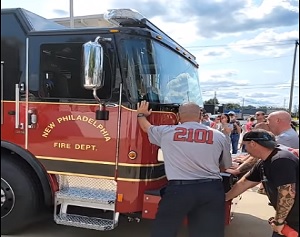 The community gathered at the fire station to be part of a push-in for the latest truck purchase, which resembled when firemen would have to push in the wagon since the horses didn’t back in.

Chief Jim Parrish said that this newest addition, bought at $692,000, has the latest technology.

“It has an automatic air primer on it, as far as the equipment on it, it’s pretty standard but, as you’ll in the front of it, the seats are all facing forward so instead of fire firefighters sitting backward, that are in the back, they’re actually seeing the scene as we’re arriving.”

Mayor Joel Day thanked the community for their continued support of the fire department and the city.

“This is your truck. When you pay your city taxes you’re paying for purchasing this type of equipment. This new fire engine will not only protect property but people, and we can’t thank you enough.”

Parrish added that they are still waiting for some equipment to arrive that has been back ordered and noted that a lot of the equipment carried on the previous truck is unnecessary on the new one due to battery-powered apparatuses.