County Engineer Back for Ninth-Straight Term 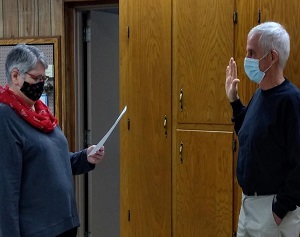 Nick McWilliams reporting – Long-time Tuscarawas County Engineer Joe Bachman will continue his work after recently being sworn in for a ninth time.

Bachman, whose latest term will extend an over 30-year career, was sworn in by Martha Campbell in a small ceremony due to COVID precautions.

He gave credit to the staff around him for accomplishments throughout his tenure.

“We can pretty much drive down any road and say there is a bridge we replaced, there’s an intersection we fixed, there’s a bank that we took off. And it’s been a joint effort by everybody.”

Bachman noted he’s proud to say that during his tenure, 40 miles of gravel roadways that were county-run have now been paved and maintained.

With a New Year and term approaching, he adds that his office will look to jump on the Waterworks Hill Road slip project, along with a bridge replacement for the structure over the Tuscarawas River outside the village of Tuscarawas, which is scheduled for 2026.