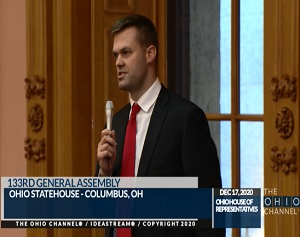 House Bill 136 prohibits the death penalty for aggravated murder when the offender is found to have been mentally ill at the time of the offense.

Sponsor Brett Hillyer noted that the Senate amendments made to the legislation contributed to the overall effectiveness of the bill’s definition.

“By specifying that, one, the defendant is able to take advantage of the provisions in 136 that they will, in fact, be sentenced to life in prison without the possibility of parole and two, made several procedural corrections that made it truly doable for the courts an effort to advance the principals in 136.”