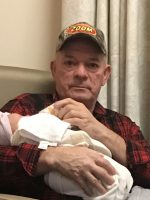 Born on June 22, 1957, in Grafton, West Virginia, Don was a son of the late Winford and Christina Kennedy Mayle.

He was a long-time laborer with the Ohio Laborers Union and traveled throughout the state helping to construct bridges, roads, and commercial buildings and retired in 2014 when his health would no longer allow him to continue working a job he thoroughly enjoyed.

Don was an avid fisherman and hunter who enjoyed watching professional wrestling, attending baseball games of his son, Ryan, and spending time with his family.

On June 23, 1990, Don married the former Marsha Miller and will be deeply missed by his family; Ryan (Madison) Johnson of Dover, Stephanie (Sherman) Withrow of Cleveland, Corey (Robert) Rennar of South Carolina; Donald Mayle, Jr. of Ravenna, Cynthia Johnson and Julie Byrd both of Cortland, Ohio, and numerous grandchildren and great-grandchildren.

Completing the family are his siblings, Patricia Mayle of Grafton, West Virginia, David Mayle of Phillipe, West Virginia, Robby Mayle of Malvern, and Randall Mayle of Canton as well as numerous nieces and nephews.

In addition to his parents, Don was preceded in death by a brother, Joseph Mayle.

In keeping with Don’s wishes, there will be no public visitation or services. Burial will take place in the Evergreen Memorial Gardens in Louisville, Ohio.