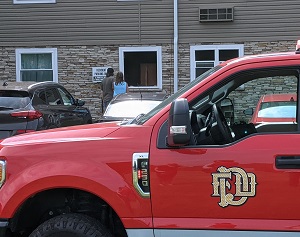 Crews responded at 3:04 p.m. to 139 Fillmore Avenue in the city for the report of a fire in an apartment complex.

Fire Captain Brooks Ross says that when crews arrived, building staff were in the process of evacuating the building’s residents, which reportedly consisted of mostly elderly individuals.

“No one was injured, thank goodness, and for having a fire in a multi-story apartment complex with a lot of elderly people, this went about as well as you could go. I can’t say enough about the management staff. They did a great job of getting people out.”

Ross commended a maintenance worker who closed the door on the room of origin, helping limit the spread.

The fire was contained to the apartment of origin, with moderate smoke damage to the walls on the first floor outside of that room.

Ross says that no specific cause has been determined, but crews were able to pinpoint the point of origin.

“We know it did start in the bedroom of that apartment. It looks like in the closet, or around the closet area. And we do have one of our fire investigators here, and he’s starting his investigation. We know where it started, just not sure what started it yet.”

Outside of the resident of the apartment where the fire originated, no one is expected to be displaced.

Firefighters from New Philadelphia and Uhrichsville were called in as a precaution initially due to the number of residents within the building.