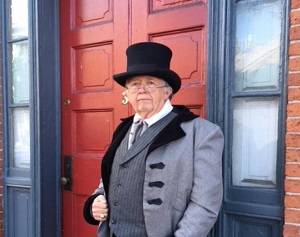 Chris Hart, a well-known historian, and storyteller will portray William Chilcote, a Civil War veteran, as he prepares to receive guests in his home on Christmas Eve 1893.

He’ll pause to reflect on how Christmas was celebrated in song, food, and fellowship during the war. The program will be held via Zoom on Thursday, December 10 at 6:30 PM.

William Chilcote, who spent four years fighting with the Union troops, was a lucky man.  After surviving the harsh conditions of war, he was able to return home to New York where his sweetheart greeted him with open arms.  In the years ensuing the war, he had flashbacks of the many men he shared camp with, of the men he confronted in battle, of the men, who like himself, were fighting for a cause that he felt strongly about. He knew that his survival depended not only on his own skill and wit but on the generosity and bravery of others. On this Christmas Eve of 1893, Chilcote warms himself with memories of the camaraderie he developed with strangers who had become family.

Chris Hart has created a venture known as “History Comes to Life” which allows him to combine two areas of personal interest; history and storytelling.  Appearing in costume Chris brings to life numerous historical and literary characters (over 50 to date and still expanding) ranging from Cy Young to Icabod Crane to Peter Daley, a Titanic survivor.  Hart serves as adjunct faculty and guest lecturer at several universities in Ohio. In addition, Hart has served as program development manager at Historic Roscoe Village in Coshocton, Ohio. Hart uses his acting talents at local community theaters and in two murder mystery troupes. He has participated in the National Storytelling Festival in Jonesborough, Tennessee, and in the National Park Service in Pennsylvania, including Gettysburg.  The Tuscarawas County Historical Society recently awarded Mr. Hart the Zeisberger Heckewelder Medal for outstanding contributions to local history.

The program will begin via Zoom at 6:30 PM on Thursday, December 10.  To register, visit www.doverlibrary.org/registration or contact Sherrel at srieger@doverlibrary.org.