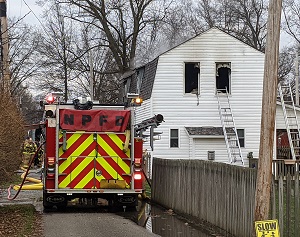 Nick McWilliams reporting – A home on Race Street in Dover will likely be deemed a total loss following a Tuesday morning fire.

The Dover Fire Department was dispatched to the scene around 9:30 a.m., with flames and smoke visible from the first-floor of a two-story building.

The fire originated in the garage below a second-floor apartment, which took roughly 30 minutes to extinguish. Captain Brooks Ross says that no one was inside the building when the fire broke out.

“They got about three-quarters of the search done when we did confirm someone had contacted the homeowner and he was able to verify that everyone was out of the home. They did have a couple pet cats that were inside.”

The fire from the first floor made its way upwards, causing a partial collapse upstairs in the kitchen area.

From the preliminary investigation, Ross says crews determined the fire broke out due to an electrical issue on the first floor from an outlet.

Crews from New Philadelphia and Strasburg assisted on scene, along with Smith Ambulance.