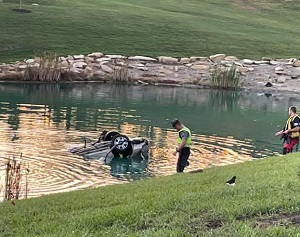 First responders were called out, early Tuesday morning, to an accident scene in the 4000 block of State Route 516.

The crash was reported by a landowner around 7am but the Ohio State Highway Patrol suspects the actual incident happened around 3am due to a witness statement of hearing a loud sound and then seeing another vehicle outside, which picked up the driver.

Trooper Michael Maddox explains that alcohol is not a considered factor.

“Vehicle that was eastbound, on SR 516, and as it came around a curb, the driver lost control of the vehicle and it went left of center, then off the left side of the road, and the vehicle overturned several times. The vehicle came to rest in a pond and it was mostly submerged and it was on its top.”

Assisting at the scene include the Tuscarawas Sheriff’s Office, Sugarcreek, and New Philadelphia departments, along with, Dover fire department and the dive team.

The Dover resident, who was uninjured, ultimately went to the city Police Department, around noon, to explain what had happened.

Maddox adds that he was cited for failure to control and for not having a valid driver’s license.