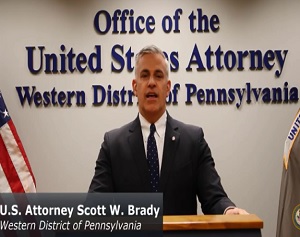 Two men, from Uhrichsville and New Philadelphia, are among members or associates of a motorcycle club facing charges.

A United State Department of Justice release noted that the indictments relate to an ongoing investigation regarding members and associates of the Pagans Motorcycle Club. The group operates around western Pennsylvania and engage in activity including federal violations of drug and firearm laws.

An investigation began in August 2018 that led to a Title III wire investigation that intercepted multiple telephone communications from August 2020 through November 2020.

According to US Attorney Scott Brady, the gang’s primary business is drug trafficking.

“And violence is the primary tool to protect that drug business. The FBI estimates that there are over 1,500 members and 41 chapters nationwide. The Pagans have used violence to control heroin, cocaine, and meth trafficking in Allegany, West Moreland, Erie, Fayette, and Washington counties. For decades they’ve avoided prosecution.”

According to this Indictment, the Bonanno’s participated in conspiring to distribute and possess with intent to distribute 500 grams or more of methamphetamine, a Schedule II controlled substance between January and November of 2020.

Phillip Bonanno was also charged with distribution and possession intent for 500 grams or more of cocaine.