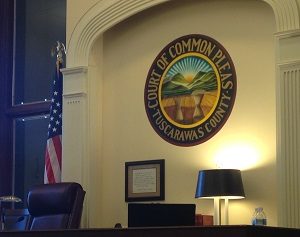 Nick McWilliams reporting – Former Newcomerstown Teacher Adam Lefler has been granted a judicial release after serving one year in a sexual battery case involving a student.

Lefler was found in a vehicle in the parking lot of the Claymont Center in late April of 2019 with the minor, a situation the state said was “carefully setup” by the then drama director.

His sentence was for two years with the Ohio Department of Rehabilitation and Corrections for sexual battery and contributing to the unruliness or delinquency of a minor, starting in January of 2020, with the chance for judicial release after one year.

As part of the ruling by then Tuscarawas County Common Pleas Judge Edward O’Farrell, Lefler is now required to meet probationary standards as laid out by the court, according to Assistant Prosecutor Scott Deedrick.

“He has to complete a sex offender track at a community-based correctional facility, which is a prison alternative, lockdown facility, with more of a treatment aspect than is available in the prison system. It is a four to six-week program, depending on how well and how quickly the people get through the programming.”

In addition, no contact can be made with the victim, with Lefler required to remain on the sex offender list as a Tier 3 individual for life.

He will remain under supervision for two years. Violations in the judicial release stipulations will result in additional prison time.

The victim appeared during the hearing, noting she feels much stronger than in the months following the incident and sentencing, and will not allow Lefler’s actions to define her.