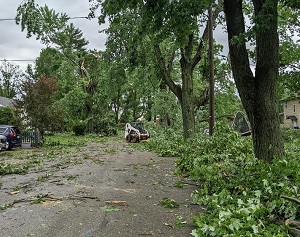 Nick McWilliams reporting – A storm cell that descended on the Tuscarawas Valley ripped through Gnadenhutten, causing damage throughout the village.

Emergency personnel, village employees, and residents were out Tuesday cleaning some of the leftover damage, with many streets blocked off by limbs and trunks.

The Heck’s Grove Park area received some of the heaviest damage, with trees uprooted, some of which landed on playground equipment and caused damage to shelters.

A handful of homes received heavy damage from trees, which fell through some residents’ roofs.

Clean-up efforts are ongoing, and anyone in the area is urged to proceed with caution due to debris and tree limbs.