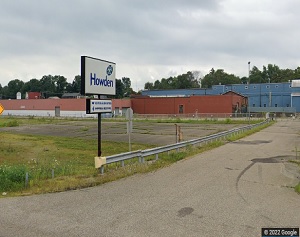 Nick McWilliams reporting – While demolition is nearing completion for the former Howden-Buffalo plant, redevelopment could take longer than first thought.

Mayor Joel Day told New Philadelphia council recently the last bit of teardown and clean up was nearing its end on the property on South Broadway Avenue.

However, given recent economic events and the current state of available workforce, plans for growth on the site could be farther into the future.

“The inflationary cost of materials and labor shortages have caused several potential developers of the Joy Howden property on South Broadway to delay returning request for proposals to the County Economic Development and Finance Alliance. That’s what Marla Akridge, the head of the EDFA, recently reported to me. The EDFA owns the property and is overseeing its redevelopment.”

The 17.5 acre site has undergone an overhaul with dilapidated structures, and contaminated soil is being removed by the Ohio Environmental Protection Agency through a company.

The city hopes to see the property utilized in a way that bolsters the local economy, and are asking that the oldest building on the site, built in 1880, will remain and be incorporated in the redevelopment.