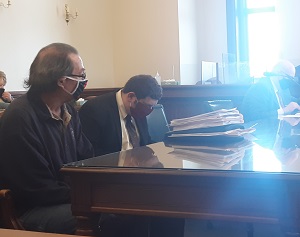 Adam Soto, of New Philadelphia, appeared before Judge Mike Ernest for a sentencing hearing related to an animal cruelty charge.

The 59-year-old ended up pleading to no contest in the case where he killed his bulldog.

Tuscarawas Prosecutor Scott Deedrick noted that it was a tragedy for the dog when Soto essential snapped, while using drugs, and killed the companion animal.

“And I think the facts were really irrefutable that Mr. Soto, using narcotics, having a long history of struggling with his anger management, lost his temper and brutally killed his own dog.”

Soto maintained that he acted in self-defense as the dog attacked him. He expressed regret, he wished it never happened, and noted that he was not doing drugs that day.

“She was loving and compassionate until that evening. I was not under the influence of drugs. I know what I did was wrong but I didn’t have a choice. She was 125 lbs. She had me in her jaws with my hand and I had nothing to do but take my knife and stab her. She didn’t suffer.”

Judge Ernest ultimately sentenced Soto to reserved time of two years of community control sanctions, with a requirement that he also serve in the Tuscarawas County Jail for six months for the 5th-degree felony.