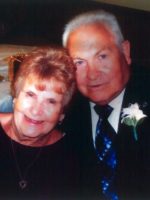 Janet L. Carr, age 89, of Uhrichsville, died Thursday, December 31, 2020, while in the care of Claymont Health and Rehabilitation at Uhrichsville.

Born on May 9, 1931 at Uhrichsville, Janet was a daughter of the late Wallace A. and Hazel L. Cecil Gold.

She was a graduate of the former Uhrichsville High School and on July 11, 1952, married Robert M. Carr. Together they enjoyed square dancing at Nuhall, riding together on Bob’s motorcycle, taking the family boating and camping at Senecaville Lake, and had just celebrated 68 years of marriage prior to Bob’s passing on July 18, 2020.

Janet was employed as head of the Houseware Department at the former Harts Store at New Philadelphia and enjoyed her time at home raising and caring for her family. She loved attending the sporting events and activities of her children and grandchildren.

In addition to her parents and husband, Janet was preceded in death by a son, Robin Carr; a sister, Nancy Burdette, her twin brother, Jack Gold and a brother, Donald Gold.

A private family service will be held in the Linn-Hert-Geib Funeral Home & Crematory at New Philadelphia. Cremation will take place through the care of Geib’s Tuscarawas Valley Crematory with inurnment in Union Cemetery at Uhrichsville.