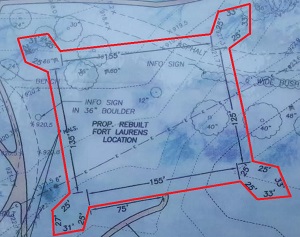 Nick McWilliams reporting – Ohio’s only Revolutionary War fort will soon return to its former state, following an announcement from the Ohio History Connection.

The group announced that Fort Laurens will see its fort rebuilt, backed by $370,000 from the Friends of Fort Laurens and $330,000 in state funding.

Megan Wood, who is coming in as the executive director and CEO of the group, spoke during the latest Fort Laurens’ Revolution on the Tuscarawas gathering, and says that in roughly four years, visitors will see plenty of progress.

“By 2026, there will be something to see. And we might still be in progress, but many of the exhibits will certainly be done by then. And we’ll be building up momentum to that point. And really thinking about the 250th [anniversary] of the fort itself from 1777.”

Initial plans will see extensive work on the Tomb of the Unknown Patriot, the graves of the soldiers who died at Fort Laurens, updated exhibits, and further archaeological work for the fort reconstruction.

Much of the first phase of the upgrades should be wrapped up by 2026, just in time for America’s 250th anniversary.

The fort’s original site is affected by the Ohio and Erie Canal and part of the museum, but Wood is confident in the History Connection’s ability to manage and make an accurate rendition of what once stood.

Contributions to the project and operations of Fort Laurens can be handled at www.ohiohistory.org/get-involved/donate/.