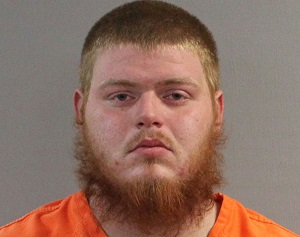 Nick McWilliams reporting – A well-being check which started following an alleged assault near West High Avenue ended with an arrest following the apparent discharge of a firearm.

Tuscarawas County Sheriff’s Deputies responded to a call that stated a male appeared to grab a female by the neck under the West High overpass before continuing down Stonecreek Road in separate vehicles.

The caller, concerned for the female’s well-being, followed the vehicles to 3500 Stonecreek Road and asked her if she was okay. Following this, the male, identified as 21-year old Austin Humerickhouse, retrieved a Glock 9mm pistol from his car, firing two shots into the ground near the caller’s vehicle.

Deputies note the female denied the assault, with Humerickhouse reportedly calling another witness to the incident telling them he would be going to jail for discharging the firearm, which belonged to a friend and had been left in the car.

That witness was reportedly in the vehicle of Humerickhouse at the time of the assault, and the sheriff’s office release notes a child was in the car of the female.

Humerickhouse was ultimately placed under arrest for domestic violence, assault, aggravated menacing and violating a protection order for using a firearm, which was prohibited by the terms of the order.

He is currently housed in the Tuscarawas County Jail awaiting his arraignment.