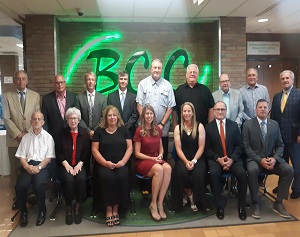 The group of 23 was welcomed in at Buckeye Career Center Saturday evening with a dinner and induction ceremony, highlighting sports accomplishments from athletes over the past seven decades.

Among them were the likes of Indian Valley South basketball standout turned current West Virginia Mountaineers Head Coach Bob Huggins, and former New Philadelphia star Cie Grant, who went on to play for Ohio State and the New Orleans Saints.

Legends like Claymont’s Eric Toukonen, who helped lead the Mustangs to the 1992 state title and coached 10 individual champions, and Tusky Valley’s Kristine Himes, who starred for the Ohio State softball team, finishing her career as the team’s all-time home run leader before moving on to a coaching career across three universities, leading to 432 wins, were recognized.

All received official plaques from the newly formed Hall of Fame, and are a part of the first class to be enshrined.

The group is planning on yearly inductions, and residents can visit the Dover Public Library, where a special exhibit and touchscreen will be located, with bios on all inductees.

Nomination forms can be found on the library’s website, along with a link to donate.