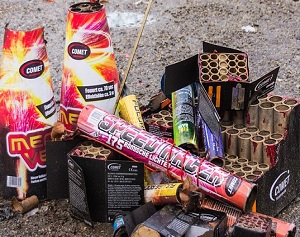 The law went into effect today (July 1st) and allows residents to set off the pyrotechnics on certain holidays including, the days on and around July 4th, New Year’s Eve and Day, Chinese New Year, Cinco de Mayo, Juneteeth, and the Hindu festival of Diwali. Previous law allows Ohioans to purchase consumer-grade fireworks by they had to move them out of state within 48 hours.

Despite this new law, several Tuscarawas County municipalities took action to limit the use, including the City of New Philadelphia, says fire prevention Captain Jim Sholtz.

“We joined with several communities in Ohio in continuing the law with the way it was that does not allow fireworks during those set days within our city limits. This more or less keeps the ban on 4g consumer-grade fireworks. It’s not really safe to [use them] in populated areas. Now the fireworks you see that are done by licensed exhibitors are carefully planned out months in advance.”

This new law does prohibit the setting off of fireworks while under the influence or if an individual is on a property without the landowner’s permission.

Residents with questions are asked to contact their municipality for information on what is allowed within their limits.