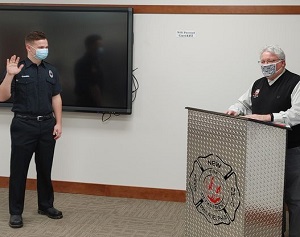 SAFER funds have brought in over $1.6 million from the federal level, with one continuing through 2021, and the second into 2023.

Chief Jim Parrish says that the additional staffing and growth for the department has all been thanks to the grants, which have been supported through city council since first applying.

“The fire service wins with people, good equipment, [and] well-trained people. And the people are the most important part of it, and also the most expensive part of it, to the tune of about 84 percent of our annual budget in the fire department. We’re very, very fortunate.”

An Assistant Fire Chief position, taken over by Matthew Tharp, was created in November, with promotions of Steven Wright, Scott Torchik and Zachary Geib to Lieutenant, and Matthew Graham and Robert Snyder to Captain.

Parrish adds that new firefighters coming in will supplement daily staffing, helping ease the strain of increasing call volume, after about 1,200 calls per year in 1992 with a minimum of four staff on duty per shift, now transitioning to an average of 3,000 calls per year.

“Now with these additional folks adding to the department, we’ll have a maximum of 10 a day, with a minimum staffing of six. Certainly moving in the right direction [but] sometimes progress is slow. But, it certainly will make a difference on the level of safety on the street.”

Training will be completed in late January for the new recruits, with goals set for the next six years of a live fire training building, improving the city’s Insurance Service Office rating for better insurance rates, and their own training academy.