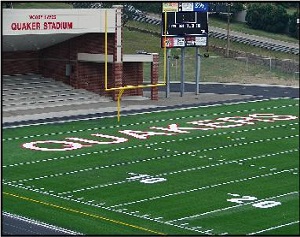 Nick McWilliams reporting – The conversation that lasted over a year related to the Woody Hayes Quaker Stadium lease could finally reach a conclusion, with the contract officially signed by New Philadelphia.

Points of contention arose after the stadium was sealed off during the height of the coronavirus pandemic, which included who had the authority to call for a closure of the space owned by the city and leased by the city’s school district.

That main sticking point caused the negotiations to last far longer than expected, with much of that work spearheaded by Councilmember Rob Maurer, who spoke passionately about the lease at the latest meeting.

“The wording in this lease has come out because we asked why [the stadium] was locked during practices last summer and fall. We were never given reason, so we want to be specific in the future. This spells out under what circumstance it can be closed. I’m not sure why the school is so concerned about this. All it does is require the school to state to the mayor why it needs to be closed, so what happened last summer and fall does not happen again.”

Maurer noted that he received correspondence from both the Ohio Department of Health and the Ohio High School Athletic Association which dispelled claims from the school district that bylaws restricted public access during sports practices, which they claimed could result in the forfeiture of games or entire seasons.

Under the agreement, authority is given to the mayor to make determinations about possible stadium closure, within collaboration with area health departments and the board of education, who can bring about concerns that might necessitate another closure.

The lease can also be modified in the future if both sides agree to changes in writing.

“I’m not going to fight with the school. This is not about who wins and who loses. This is about the New Philadelphia citizens winning or losing. It is time to put this lease behind us, and show our community we made the best lease for the city and school that permits the highest number of individuals access to Quaker Stadium.”

While the lease states the board of education may not restrict public access outside of competitions and ceremonies, Lanzer proposed a change to ask members to keep lanes open “when it is safe, appropriate, and compliant to directives.”

Council ultimately shot down that proposal. The 50-year lease will now be sent to the school’s board for their portion of discussions and potential signature.