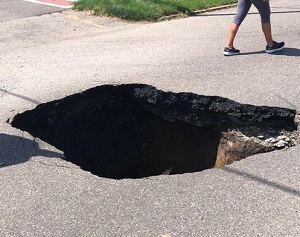 Nick McWilliams reporting – Following a sinkhole that appeared on Second Street Northeast over two weeks ago, New Philadelphia officials have provided an update.

Work and planning has been ongoing to secure the roadway and build it back up, after the sizable hole developed due to a failing storm-sewer manhole.

Service Director Ron McAbier says that the base of the manhole deteriorated, with mortar and bricks falling apart, leading to the pavement giving way.

At the latest council meeting, he says that the temporary patch is in place, and they will have to replace two components before resurfacing can begin.

“We ordered two new ones, because it’s impossible to situate the storm manhole in there and get the sanitary manhole in there. So we’re going to replace both of those at a later date, whenever they come in. We ordered them last Tuesday.”

McAbier was unable to provide a timeframe for the delivery of the two new manholes, but was optimistic that the city will have the repairs finished soon.

He did feel the patchwork is suitable for now, and noted the city used a large amount of concrete to fill in the void for the time being.