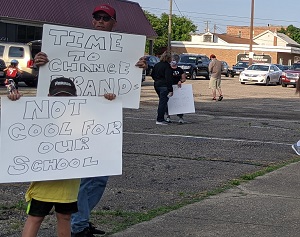 Nick McWilliams reporting – During the June 15th New Philadelphia City Schools Board Meeting, representatives and leaders detailed some plans for grade leveling within the district, but some residents showed displeasure with the move.

The grade leveling idea would designate buildings for certain academic years, with East Avenue and York utilized for kindergarten through first grade, South for second and third, West dedicated to fourth and Central solely used for fifth grade.

Prior to the discussion at the meeting, held in a virtual manner due to COVID-19 restrictions, a group of around 50 gathered across Front Avenue from the district’s administrative building in protest of grade leveling.

Todd MacMath, a parent of New Philadelphia students and Administrator for the NP Moving Forward Together Facebook page, expressed the displeasure of the group, saying that the decision seemed rushed and too many details of the plan had not been discussed with the public.

“We built our home in York Township for a reason. Because we really wanted our kids in that K-5 to go to York School. My wife went there. Generations before her went there. And that’s one of the main reasons that we built there. And we don’t want that to change. We don’t think that needs to change. We have great teachers here in this district, who are awesome.”

MacMath also says that concerns relate to the loss of community schools, with students going to four schools in the span of five years, along with what protestors described as a lack of consistency hurting the educational experience.

During the board meeting, over 30 statements were read from residents, with a few praising the motion, along with a majority raising concerns with grade leveling.

As for the school’s thoughts on the matter, board members showed some hesitation along with some support. Superintendent David Brand admitted more details would need to be addressed, but says that he feels the idea could address overcrowding issues and potentially streamline education within the district.

“Having teachers together by grade level will be able to work together. We’ll be able to have Title supports or intervention supports, as [a point] one of the commenters made, instead of being spread between six grades, it will be one or so. That way they can have much more of a laser focus, and have much more attention to each child.”

The board met for over two hours before calling the vote, with members Janna Leeper, Chris Weaver and Dave Frantz voting yes, Dr. Daniel Fuller abstaining and Denver Gallentine voting no.

Further details are expected to be released soon with how the district intends to move forward with transportation, special education needs and other key issues with the transition to leveling. 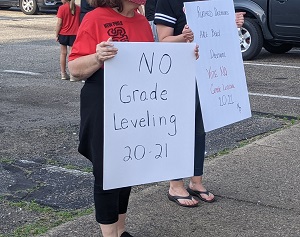