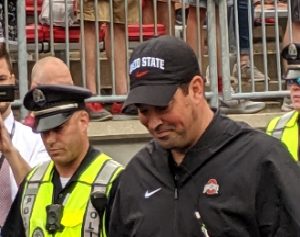 Nick McWilliams reporting – Indiana went backwards on their first two drives, had a punt blocked, saw two players collide on a kickoff return and gave up 96-yard interception return for a touchdown.

Ohio State showed fans that a shutout of Cincinnati was not a mirage. Buckeye backers know this team is good; now we know how good.

J.K. Dobbins could have easily eclipsed his career-high, but was not needed for much of the second half. With 22 carries, the Texas-native earned his 193 yards and touchdown.

There are so many different angles to look at for what happened, but let’s take a look at just a handful.

As a recruit, Chase Young was hyped to be one of the next big things for the Ohio State defensive line room.

And somehow, he exceeded those expectations.

Larry Johnson is a regular Mister Miyagi when it comes to morphing budding talents into nightmares.

The Bosa Brothers, Tyquan Lewis and Dre’Mont Jones to name a few.

Young notched two sacks and could have had more if he played the entire game. After the Cotton Bowl not so long ago, Young said his goal was between 12-14 sacks in a season.

He has five in three games.

Did he low-ball it?

Jeffrey Okudah and Damon Arnette were both dinged up at various points on Saturday. That’s concerning in the moment, but looking back, it seems okay now.

Arnette stole the show late, calling off a thorough victory with one of the longest interception returns for a touchdown in program history.

Okudah played lights out, which is becoming a habit for him.

The biggest play allowed by the secondary was a 49-yard touchdown pass … by a wide receiver … to a tight end.

Starter Peyton Ramsey threw for half the yards he did last year, was guilty of the aforementioned pick and averaged 4.9 yards per completion. Not exactly great stats.

There will be better passing offenses against the Buckeyes this year where the real tests begin. But they defensive backfield has hit the ground running for Ryan Day.

Enough with the “Field Day” puns..

Seriously though how does Georgia let this guy go?

Justin Fields accounted for four touchdowns. He might have only had 199 yards passing but that was more than enough.

Fields was not quite as accurate as in weeks past, but an opportunistic defense and a lethal rushing attack complimented him well. Thank the offensive line once again for giving the sophomore quarterback more than enough time to make decisions.

Special teams are always the key

Special teams are always the difference maker, no matter how the game plays out or who tells you otherwise.

Chris Olave has slotted into Terry McLaurin’s role as the dynamo each punt team needs.

A blocked punt and a special teams tackle go a long way to solidifying him as one of the next quality, well-rounded receivers for the Buckeyes.

The return game was nothing to write home about, but defensively, Ohio State gave little breathing room on all Indiana returns.

The missed field goal early can be glossed over when the margin of victory is 40+.

These are hard to come by.

A few penalties, like Jonah Jackson’s block-in-the-back or the strange delay of game following the safety, are little imperfections.

Nothing goes exactly as plan in football, but small miscues can be the difference when it comes to the toughest part of a schedule.

Other than that, maybe the dropped pass that would’ve been an easy touchdown for Dobbins? That’s even hard to focus on given that he made up for it with a nice score on a pass play later.

Nothing to see here, really.

Back to out-of-conference play next week against Miami [OH].

The RedHawks are coming off a 35-loss against the Bearcats, the same Cincinnati team that was blown out by Ohio State.

Defensively, Miami has forced a few turnovers here and there, but allow 30 points per game.

A unit with plenty of youth at offensive skill positions signifies a plucky approach, but this could be another early exit for the Buckeyes starters with the game well in hand at halftime.