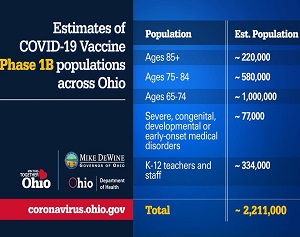 Nick McWilliams reporting – Ohio Governor Mike DeWine opened his coronavirus briefing condemning the violence on Capitol Hill from Wednesday, before diving into the pandemic once more.

DeWine, like other lawmakers across the nation, decried the use of violence for political gain, calling the actions by those who stormed the Capitol during congressional hearings and Electoral College certification an affront to the Constitution.

He added further that the country’s belief in its governing body is forever tainted following the events.

“What we’re seeing is chilling for us because it shows a crisis of faith. That is what the Constitution is. It’s a leap of faith that we all take together. The people who scaled the walls have lost their faith. And the question for our country is, how much of America is now faithless? Faith in our Constitution and faith in the rule of law. That faith has gotten us through a lot of tough times.”

On the vaccine front, Phase 1B distribution is slated to begin, formally, on January 19th, starting off with residents age 80 and older.

DeWine adds that this is a targeted effort for those most at risk, which accounts for around 420,000 to 450,000 Ohioans.

“We will start with our most vulnerable, where we have seen the most tragedy. The people in this state who have the most risk of death. That is people in the general population, not in nursing homes. We’re already working that through.”

Total cases in Ohio reached over 753,000 as of Thursday afternoon, with deaths now just under 9,500.

The governor added that he is aware some counties have vaccinated individuals who do not fall in the 1A category, a revelation he called, “disturbing.” DeWine urged all health organizations to adhere to guidelines set forth by the Ohio Department of Health.