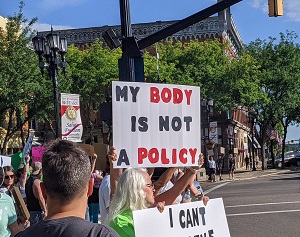 Nick McWilliams reporting – A large group of protestors joined together in the Square of New Philadelphia, protesting the overturning of Roe v. Wade.

The landmark case which legalized abortion in the 1970’s was overturned this week by the Supreme Court with the ruling in Dobbs v. Jackson Women’s Health Organization.

The new ruling leaves the matter up to each individual state, with Ohio passing their own legislation banning abortions after six weeks, or when the first traces of a heartbeat can be detected.

The group first started organizing by utilizing word of mouth over social media, with Co-organizer Stephanie Bond stating that it was moving to see the response on a subject very personal to her.

Handmade signs lined the streets, containing phrases such as “I Dissent,” “Stop This War on Women,” “My Body, My Choice,” and “Every Baby Deserves to Be Planned.”

Fellow Co-organizer Deborah Meese said that the entire purpose of the showing was to inspire others to have their voices heard.

“I have two beautiful daughters who are everything to me. And for a while now, it seems like we’re being pushed against more, and more is being taken away from us. And if we don’t start somewhere with fighting back, when is it going to end? How bad is it going to get? We have to start being vocal. We have to start informing people and changing minds and changing hearts.”

Men joined the protest as well, including Michael Szewczyk (Says-Wick) of Sherrodsville. For him, the ability for women to make their own choices lies at the heart of the people resisting the changes.

“I don’t think you have to personally agree with having an abortion, but it’s not your business to tell anybody else that they can’t have one. Whether it’s for healthcare reasons or choosing. I’ve seen too many kids that grow up in bad homes. The foster system is a joke, so they wouldn’t be any better there.”

The protest was met with some resistance, from obscene gestures in passing cars, to at least one counter-protest sign displayed across Broadway.

Other gatherings have been organized across the nation, including around the Statehouse in downtown Columbus.