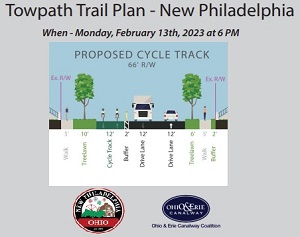 Nick McWilliams reporting – As New Philadelphia looks forward to connecting a recreational path from Cleveland to their city, residents are asked to give their own thoughts.

Work with the Towpath Trail currently concluding in Zoarville, officials in Dover and New Philadelphia have been seeking an extension further south in Tuscarawas County, spurred on by the economic and wellness potential.

Mayor Joel Day said that a public platform will be available next month to allow residents the opportunity to give input and insights in how the path should be developed, and where it should go through the city.

“The study is being conducted by Envision Group of Cleveland, the same company that developed the city’s plan for bicycle and pedestrian trails. The proposed Towpath Trail route would link its southern terminus at Waterworks Park to the trail section in Dover.”

Dover’s proposed section of the trail would see it run along the Tuscarawas River south from Zoarville, and along a bridge crossing the river near Union Country Club.

The public forum will be prior to council’s February 13th council meeting, and will start at 6 p.m. All residents interested in the project are urged to attend.