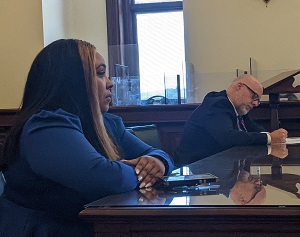 Mary Alice Reporting – A woman charged in the dumping of Amber Sherrell’s body has decided to change her original not guilty plea.

Cekoyia Riechers, 25, of Akron, had a status hearing scheduled for Tuesday, but after not showing up, Judge Michael Ernest decided to not issue a warrant until Wednesday, which was scheduled as the trial date.

At Wednesday’s hearing, Riechers did appear and pled guilty to the five-count indictment that was handed down by the grand jury and read by Judge Ernest.

The State of Ohio has made a sentence recommendation that the judge is not bound to issue.

An August 23rd sentence hearing is scheduled and a pre-sentence investigation will be compiled.

The co-defendant in the October incident, Daniel Fitzgerald, is facing four charge counts and has a final pretrial scheduled for August 9th and a status hearing on August 16th.