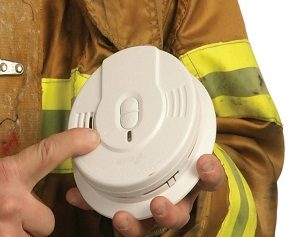 Mary Alice Reporting – With heaters on across the Tuscarawas Valley, a local fire department encourages all households to have a couple of working detectors.

The most obvious one is the smoke detector which can save lives as the National Fire Protection Association notes, in a 2019 report, that almost three of every five home fire deaths resulted in 40% not having a detector and 17% had the alarm but they were not working.

Dover Fire Chief Russ Volkert says that the ideal placement is near the kitchen and close to the bedrooms. It’s also a good idea to check the batteries twice a year, typically at the time change.

“One simple fact that a lot of folks do not know or realize is that after five or six years, the typical smoke detectors become a little less sensitive and that if you’ve had your smoke detectors for a while they should be replaced.”

From the NFPA, in fires where smoke alarms were present but did not operate, more than two of every five (43%) had missing or disconnected batteries.

In addition, Volkert notes that a carbon monoxide detector should also be placed in the home.

“Both smoke and carbon monoxide, part of the inherent danger is that there is an anesthetic effect. You’ll just go into a deeper and deeper sleep rather than be awakened so it should be located in such a place where you can hear it and it will awaken you if you’re sleeping.”

Many local fire departments do have programs that offer free smoke detectors and installation. Residents are asked to contact their respective stations for more details.