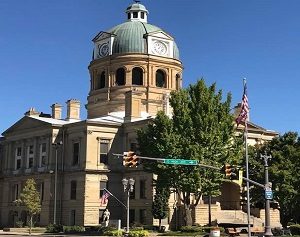 A teacher was let go by the Catholic Diocese of Columbus after an indictment in the Tuscarawas County Common Pleas Court.

Riley Stone, 27, of Dover, is facing one count each of gross sexual imposition, disseminating matter harmful to juveniles, pandering sexually-oriented matter involving a minor, and illegal use of minor in nudity-oriented material or performance.

The Tuscarawas Grand Jury indictment was filed on July 29th.

Stone, according to the Diocese of Columbus, was interviewed by police and acknowledged having inappropriate conduct with a former student. She was a teacher at Tuscarawas Central Catholic but has since been dismissed.