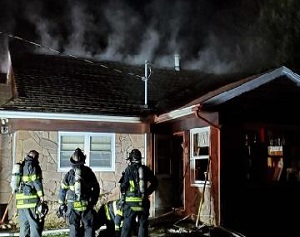 Arrowhead Joint Fire District and the Uhrichsville Fire Department were toned out at 5:42 p.m. for a furnace fire at 136 South Chestnut Street.

According to a release from Chief Steven Wright, a technician had been making repairs to the heating unit when it caught fire.

Both the technician and a neighbor were able to make it outside before units arrived.

Flames traveled from the basement upwards to some of the walls on the first floor, with crews bring the fire under control in roughly 20 minutes.

Assisting on the scene were Warwick Township and Delaware Valley Fire Departments.

Although the homeowner was not at their residency for the blaze, Wright noted the smoke detectors in the home, which all activated prior to Arrowhead’s arrival, could have made all the difference had the situation been different.

Damage from the fire was mostly confined to the basement and some interior walls, along with smoke throughout the entire home. No damage estimate was available, and the investigation wrapped up quickly due to the origin point coming from the furnace.