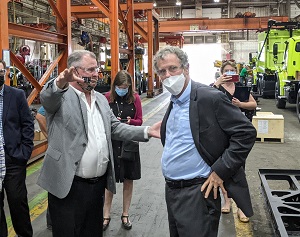 After walking through the facility, Brown noted that businesses like Gradall and its employees are slated to see improvements in the supply chain, while benefiting the country and its middle-class workers as a whole.

“It’s infrastructure they need to get their products to market. They sell to China. Some of this equipment goes to China. When you have these backlogs with ships and when the railroads aren’t up to what they should be, and highways aren’t [either,] it affects their sales. They’re getting just-in-time inventory and just-in-time sales delivery.”

Haberman discussed Gradall’s commitment to utilizing American steel, and the shipment of their products to China and Europe, stressing his thoughts on the importance of Build America Buy America for the business.

“When you literally look at a manufacturing facility, you’re looking at the cost of energy and the cost of transportation. And infrastructure is going to take us to the next level where we can be competitive worldwide.”

Brown also touted the proposed improvements to broadband, which he claims will streamline supply chains and better connect residents and workers.

The senator felt that the infrastructure bill will be passed as early as Thanksgiving.