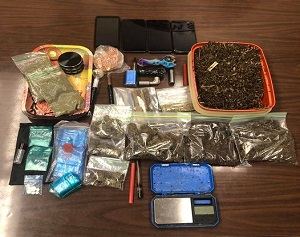 Photo from the Uhrichsville Police Department.

Following multiple complaints of suspected drug activity, officers responded to a local hotel, a location discovered thanks to anonymous tips.

A search warrant was issued and two hotel rooms were searched with assistance from the Dennison Police Department.

The police department stated that tips can greatly assist officers, which can be directed to their office at (740) 922-1212 or by sending a private message with the Uhrichsville K-9 Facebook page.