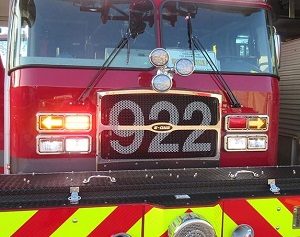 Firefighters from several departments responded to a structure fire that originated in the chimney of the residence.

The owner was home at the time but was able to make it out with multiple animals without injury.

Uhrichsville Fire Chief Justin Edwards says they were called out to 4 Johnson Ct. at roughly 8:20am.

“Shortly after that the resident advised that he could see fire inside the home. When our crews arrived they did find fire in the roof of the home that was visible from inside and out so we upgraded the call.”

Engines from Dennison, New Philadelphia, and Arrowhead Joint all responded

Edwards notes that it took about 25 minutes to extinguish the bulk of the fire.

“We believe the fire started in the chimney. Some type of failure and extended into structural components of the home and was kind of in void spaces.”

The home was insured and sustained fire, water, and smoke damage. No estimate was available.