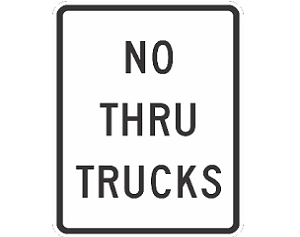 The decision to place the signs came after multiple resident’s complaints that said they were dealing with heightened road noise from the heavy loads, with one claiming structural damage to their home due to the passing trucks.

“I’ve talked to the department heads, and I feel the month grace period is plenty. And it’s time to start citing through trucks. I’ve given the police department the go-ahead to start doing that. We’ve identified, and I was actually out there while they were blade patching and saw numerous trucks as a through. Actually took a couple pictures of those trucks, and talked to a driver [Thursday] hauling from the gravel pit.”

Trucks running from businesses in the area will have to utilize Brightwood Road to connect to U.S. 250 and State Route 800, or connect to the highway by utilizing McCauley Drive.

Businesses outside the city were notified of the change via letter on July 1st, and only trucks making deliveries to locations along the extension will be permitted.

Drivers not complying will be subject to fines and potential further action.