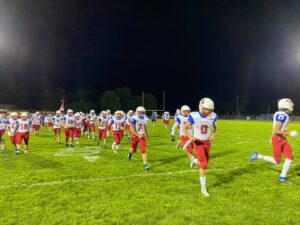 New Philadelphia made some history Thursday night, Ridgewood looks unstoppable as ever, and Conotton Valley is setting themselves up for a potential high-playoff seed.

Week 4 has come and gone, but questions remain for area teams trending downward like Dover and Indian Valley.

With the playoffs now officially a few miles up the road, which squads look to be the windshield, and who could turn out as the bug?

Sit back and buckle up for a wild ride through some mid-September Ohio high school football.

For the first time in decades, the Big Red failed to put any points on the board.

Would you believe, all-time, New Philadelphia holds the series edge 7-5-1? Attitude is the only way to describe how the Quakers handled their busy from Woody Hayes Stadium Thursday night, forcing an early three-and-out before marching down the field on a 69-yard drive, capped off by fooling the Steubenville defense and having Caden Richmond haul in a 34-yard pass from Caden O’Neill with no one within 20 yards of him. Believe it or not, that was the lone Quaker completion all night.

That single play set the tone for the rest of the night, with O’Neill scampering 64 yards on the next possession for a score.

Reise Meechan led all ball carriers with 89 yards, followed by O’Neill with 81. Logan Ortt picked up his fair share of carries, but contributed the most punting, pinning Steubenville within their own 20 twice.

Coach Matt Dennison’s team forced five turnovers, allowing just 65 yards on the ground to a group used to barrelling over all opponents. Matthew Beech was all over the field, while Drew Dummermuth and Kurtis Tetzloff had an interception each.

The extra day off will be key for the Quakers, who next take on West Holmes in an interesting style matchup.

There may not be a challenge this year the Ridgewood Generals cannot handle.

Errors against the cream of the crop in a conference are often times the driving force behind a lopsided score, The Braves found that out with two poor snaps on punts in the first quarter, setting up a pair of easy touchdowns for the Generals.

As is par for the course, Ridgewood quarterback Gabe Tingle led his team, accounting for an early rushing touchdown, tacking on another one later and connecting with wide receiver Dalton Patterson from 53 yards.

Deontae Brandon got in on the action following a forced fumble by the Braves, punching his ticket to the end zone from two yards out for the final Ridgewood tally with time winding down.

The dominant force that is the Ridgewood defensive line could do no wrong, controlling the line of scrimmage and never allowing Indian Valley the big pop plays that could have put them back in contention early on.

The Generals return to West Lafayette against Claymont next week, while Indian Valley hopes to salvage something from their season against Tusky Valley.

A banged up Derk Hutchinson from Malvern is still a very hard player to contain. Paired with a returning Adam Moser, the Hornets had all they needed to edge the Trojans on a crisp Friday night.

Moser notched three rushing touchdowns, while Hutchinson put forth his own ground attack, eventually sealing the deal late with a long scamper down the sideline.

It is worth noting, at one point, Malvern led 27-0 in the second quarter, appearing to run away with the contest well before the sun had even fully set.

But Newcomerstown clawed back, first striking through the air on a Logan Hursey to Colton Meek screen pass for 40 yards.

Eventually, the Trojans found themselves within a score thanks to Bladon Garland punching it in from the eight, making the score 27-21.

But Xavier Watson broke free for a 27-yd touchdown run just minutes later, and even after another Newcomerstown score, Malvern’s night was capped off on a final Hutchinson score.

Dover had Steubenville within their grasp last week in the last few minutes before late turnovers cost the Tornadoes. That cannot be said about the loss to Canfield.

The Cardinals are a state-ranked group who was coming off a gritty 31-24 win over New Philadelphia, and benefited from top Tornado wide receiver Nathan Ravine watching from the sideline.

Although the game was 10-3 in favor of Canfield at halftime, short-yardage runs from Chris Sammarone and Broc Lowry in the third put things out of reach. The Cardinals capped their night with the third rushing score for Lowry with under eight minutes on the clock.

Senior Derron Rothacher got the only Dover touchdown on a 1-yard plunge.

The Tornadoes’ offense has seemingly lost their spark, but must regroup when facing the ever-tough Linsly from West Virginia next week, followed by New Philadelphia to round out the year.

After being picked apart 42-7 last week, Sandy Valley came alive again, but likely not how you expect.

Claymont was very much in the contest by halftime, trailing just 21-13. By the end of the first, they were actually leading 7-0 against one of the most potent offenses in the IVC.

But, the potential underdog story of the year was spoiled by Cam Blair. All he did was go 26-for-34 for 402 yards with four touchdowns, along with five carries for 72 yards and two scores. He did force an early pass that was picked off, but made up for that on defense with a pick-6 of his own. For those keeping score at home, that’s a seven touchdown night.

Demetrius Evans caught half of Blair’s passes, turning that into a ridiculous 248 yards and two touchdowns.

The Cardinals outscored the Mustangs 34-0 from the nine-minute mark in the third to the final whistle.

Claymont was led by quarterback Graydon Mooneyham, who started in place of a banged up Kaedin Presutti, going 12-for-24 for 99 yards with a pick, along with 11 carries for 89 yards. Tailback Brody Rauch picked up 54 yards on 15 carries, while C.J. Watters earned the lone rushing score, in addition to a punt return for a touchdown.

Sandy Valley draws Garaway next for a quarterback showdown, while Claymont travels to Ridgewood.

Realistically, Garaway’s starters played less than a full half of football Friday night.

Coach Jason Wallick chose to sit his starting offense before halftime, after quarterback Garrett Newsome went 8-for-10 for 103 yards with three touchdowns, gaining 98 yards on the ground with a score. With five minutes to play in the first, the Pirates were already up 21-0.

Ethan Miller turned seven carries into 50 yards and a touchdown, and linebacker Garrett Hershberger even joined the action with a 1-yard fullback dive.

Tusky Valley quarterback Tanner Phillips earned 141 yards and a touchdown with an interception on 12-of-20 passing. Tristan Tesch ran hard for 105 yards on 15 carries with a touchdown, as Phillips added 51 yards of his own and a score.

Tesch was also a force on defense, garnering 12 total tackles, 1.5 for loss, and an interception.

Beau Wolf caught the only Trojan touchdown pass, which was good enough for 69 yards.

The undefeated Garaway Pirates now move on to their toughest test to date with Sandy Valley away, while Tusky Valley has to deal with an Indian Valley team coming off back-to-back-to-back losses.

Nothing too fancy for West Holmes in a bounceback win, unless of course you’re talking defensively.

The Knights picked off four passes from the Minutemen, two of which were by ballhawk Tucker Kaufman. Ryan Bridenthal and Garrett Eastep handled the other two interceptions.

Quarterback Noah Clark went 5-for-8 for 42 yards and rushed for 54 on what was a quiet night. The best part of the win likely was senior Peyton McKinney taking over most of the signal calling duties, connecting 10 times for 112 yards with a touchdown, linking up with Emmett Myers.

McKinney’s season was cut short last year with a torn ACL, an injury he pushed through to play in his senior year.

Lexington netted just 16 yards on the ground, and were outpaced all evening.

Coach Zach Gardner was pleased with the defensive dominance, but might work towards more offense next week, when West Holmes faces a fast-rising New Philadelphia team away from home.

The current top team in the Eastern Buckeye Conference walked away from Carrollton with their unbeaten record intact.

Carrollton fell to West Branch 28-0 last season, but ran into trouble defensively, falling behind 31-0 by halftime. They did that without senior quarterback Brock Hillyer, who was out with an injury.

Sophomore Dru DeShields completed 21 of his 35 passes for 188 yards and three touchdowns, along with 114 yards and a score. Six West Branch receivers picked up receptions. Nick Wilson added a pick-6 on defense as well.

Carrollton stormed back in the second half, leaning heavily on the rushing attack and sophomore Chase Oehlstrom, who led the team with 105 yards on 25 carries and a touchdown.

Quarterback Luke Warner connected on an 80-yard pass to Talen Timberlake, before the two found each other again in the fourth to make things 31-20. But DeShields worked some magic again, driving the Warriors down the field for a late touchdown.

Carrollton will travel to Alliance next week.

The tailback picked up 239 yards, averaging over 13 yards per carry and scoring once. Quarterback Connor Puskarich crossed the goal line twice as well with 75 yards, while also connecting with Nick Neuhart for a pair of touchdowns through the air.

Tigers’ quarterback Kape Schupbach went 15-for-25 for 135 yards, getting picked off once but linking up with Javier Pryor for a touchdown. Lucas Lindsey earned less than one yard per carry, but still found the end zone.

Defensively, Strasburg was on the field for almost the entire evening, having less than nine minutes of possession.

That game of keepaway resulted in over 400 yards rushing rushing for Trail.

After last year’s tie to the Blue Dons to keep the Rockets out of the playoffs, there was no doubt what message was being sent Friday.