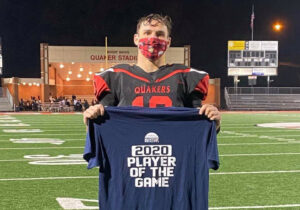 New Philadelphia and Dover flexed their muscle to move on in the OHSAA playoffs, with West Holmes continuing their hot streak at the perfect time.

Friday’s slate was packed with triumph for a host of area teams, backed by spirited performances on the biggest stages.

Some regular season contests wrapped up as well, with not so positive results.

In the featured game Friday, the Quakers reminded the Tuscarawas Valley just how powerful they are on both sides of the ball.

Backed by 368 yards of total offense and a defense that negated nearly all of the Cowboy’s attack, New Philadelphia is rolling into the next round.

Running back Reise Meechan led all ball-carriers with 130 yards on 15 carries, scoring twice. Teammate Logan Ortt scored through the air to open up the night on a 4-yard reception from Caden O’Neill, before bulldozing his way into the end zone from short yardage before halftime.

O’Neill was his normal proficient self, but upped the ante in what might be his single best performance of the year, going 12-for-15 for 232 yards and two touchdowns.

Wideout Caden Richmond capitalized with his speed advantage, burning the Cowboy defense for a 63-yard score, adding to his four catch, 153 yard night.

In a word, it was the complete performance. Moving the ball on the ground, taking advantage of a defense cheating in with the pass after, and enjoying a defense that bullied their way into the backfield often. Defensive lineman Mitchell Stokey confounded the Youngstown-Chaney blockers, sacking quarterback Jason Hewlett five times. Linebacker Matthew Beach took advantage of the constant pressure, picking off two errant passes.

The lone blemish came just before halftime on a 78-yard touchdown pass thanks to blown coverage, a forgivable mistake given how well the Quakers played in all aspects.

A familiar opponent is up next in the playoffs in the Aurora Greenmen, who knocked New Philadelphia out of the postseason last year.

Likely the surprise of the night, Dover took the long journey east to Death Valley, promptly quieting the Man O’ War statue for much of the night.

The Tornadoes avenged a loss earlier in the year to Steubenville, thanks to four first-half touchdown passes from junior T.C. Molk. Will McCrate caught just two passes Friday, but both went the distance, while Jacob Hostetler converted 11 catches to 116 yards and a touchdown.

Hostetler also added a ground score, with the Dover offense surprisingly outpacing Steubenville in the rushing game in the first half.

The Big Red eventually got their rushing machine rolling with Rodney James accounting for 230 yards on 19 carries, but it was far too little, too late. Molk opened the scoring with, finding senior Nathan Ravine on a 52-yard strike. That early lead was extended with Molk connecting with McCrate and Matthew Gigax for a three-score advantage.

Even after Steubenville started clawing back, Dover and Dan Ifft dug into their bag of tricks to throw another strong right hook. Connor McGarry scored on a 63-yard rush, Molk pitched to Derron Rothacher who then pitched to Hostetler who scored, and the offense blended a beautiful mix of shots down the field with hard earned totes up the middle.

It’s the kind of offense Tornado fans have been itching for after a few lackluster performances.

Work still needs to be done moving forward, as a powerful Streetsboro lies ahead in the next round.

West Holmes is using their lower seed as motivation, which is paying off.

Playing with a swagger and a chip on their shoulder, the Knights enjoyed the return of sophomore Bret Shearer, who pounded the rock 20 times for 126 yards and three touchdowns after an extended absence.

His hard running was complemented by quarterback Peyton McKinney, who accounted for 261 yards and two touchdowns passing, including a 74-yards bomb to Emmett Myers on their second play from scrimmage.

Cloverleaf still battled back in the first, keeping things close, but costly pass interference penalties haunted them down the stretch. That, paired with the fact they gained just over 250 yards while allowing 436, and it was all Knights, all evening.

Myers scored again on a 50-yard touchdown pass, while Garrett Eastep and Brady Taylor were busy in the passing game as well, accounting for crucial third-down conversions and timely set-up passes.

It was an upset on paper when it comes to seeding for the playoffs, but it was further proof the Knights deserved a little more respect in the eyes of coach Zach Gardner and his staff.

The task at hand remains difficult moving into another round, with Padua Franciscan up next in Parma.

It was the longest night Conotton Valley has had all year.

The Rockets found themselves on the wrong side of a 42-6 game at halftime, the same score that would round out the night.

Conotton Valley found themselves trailing 14-0 before grabbing and interception in the first, but were unable to make much noise from there.

The lone Rocket score came with less than two seconds in the opening half, when quarterback Evan Rice punched his way across the goal line from short yardage.

Conotton Valley turned the ball over on downs multiple times, and failed to capture the offensive spark that fueled many of their victories earlier in the year.

Newark Catholic now moves on to face Danville, while Conotton Valley will likely attempt to schedule a few games before the season concludes.

Strasburg allowed over 300 rushing yards in a rough evening far from home.

Four Tiger turnovers hurt the most in the losing effort, which negated plenty of their positive moments. Tayshaun Curtis got the start at quarterback, going 8-for-14 for 98 yards passing and rushing 15 times for 76 yards, adding an interception on defense. But it was Zach Chaney who stole the show with two touchdowns on 18 carries with 69 yards.

New London passed for a mere two yards, but still converted a touchdown by Jamil Arnold to Kojac Velazquez.

Arnold starred as the leading back for New London, rushing for 184 yards and three touchdowns.

A shootout in every way, Tusky Valley came up just short of their second win of the year.

Quarterback Tanner Phillips had what was likely his best night at the helm of the Trojans offense, going 16-for-25 passing for 303 yards and four touchdowns, paired with 22 carries for 186 yards and two scores.

His lone blemish, a fourth quarter interception, came with under three minutes to go in the final frame, proving to be too much to overcome. Tusky Valley held Tuslaw to a fourth-and-one deep in their own territory, but a plunge up the middle by Jeremi Strong on a gutsy late call sealed the deal.

Strong finished his game with 242 yards and four touchdowns on 38 carries.

It was an unfortunate outcome for the Trojans, who dialed up deep shot after deep shot for touchdowns, with Phillips arching the ball over the top of defenders right into the pocket of his receivers. He connected on scores of 26, 74, 43, and 46 yards.

In a game that saw little offensive action from the Trojans, Newcomerstown fell to 1-5 this year.

Buckeye Local had a rather even approach to their night, scoring a single touchdown in all four quarters.

The Trojans often found themselves in their own territory, leaving Lee Stadium with little in terms of offensive production.