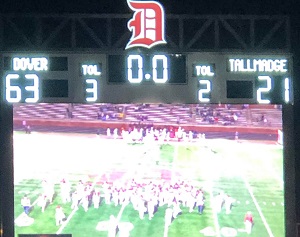 The legend of T.C. Molk was born against Tallmadge Friday night.

The Dover Tornadoes dominated in the first round of the 2020 OHSAA Playoffs, securing another showdown with the Steubenville Big Red.

Elsewhere, West Holmes is moving on, while the playoffs have come to an abrupt end for TCC. Claymont, outside of the playoffs, dropped a tough one as well.

Take a moment to catch up with Friday’s portion of your Weekly Roundup for the opening round of the playoffs, powered by Parkway Quick Lane.

Molk, the McInturf Realty Player of the Game, found the end zone seven … seven times, all of which were in the first half, striking through the air in the kind of air attack Texas Tech would love.

His favorite target was, unsurprisingly, Nathan Ravine, who returned to the lineup in a much more predominant fashion after being hobbled by an injury the last few nights. He wound up with seven catches for 145 yards and five scores.

This one almost seemed like a long night in store for the Tornadoes to start, with the Blue Devils’ first play from scrimmage going for 83 yards from Ty Hurst to Collin Dixon. It would end up being the longest play all night for either side, and the last time Tallmadge proved a real threat to Dover.

Derron Rothacher grabbed an interception, while teammate Evan Klar picked up two, adding to an impressive night in which he hauled in five catches for 108 yards and a touchdown.

To add to a complete team victory, Jacob Hostetler scored on a screen pass, while also returning a punt all the way for paydirt.

Hands down, Friday was the best performance Dover and head coach Dan Ifft have pulled off this year, setting them up nicely for a grudge match with Steubenville, after falling to the Big Red 28-7 earlier this year.

The Knights were able to put things away early, keeping starters out for much of the second half and setting themselves up for round two.

Falling behind early on a field goal, West Holmes fired up their offense when quarterback Peyton McKinney found Brady Taylor for 47 yards off a wheel route from the slot. Credit where credit is due for Emmett Myers, who sold a bubble screen underneath enough to cause the corner to bite on the play, opening up nothing but green in front of Taylor.

The senior receiver and safety was not done, finding the end zone two more times, pulling in a one-handed catch over the middle from about 25 yards away and racing past defenders, before capping off his night with a 78-yard direct snap rush down the left sideline.

Coach Zach Gardner felt the team is playing with a chip on their shoulder, following a No. 12 seed in the playoffs. That position was something they felt was disrespectful, and the Knights are out to prove they deserve more credit.

Up next is Cloverleaf, a team that’s gone 5-1 this season, who only fell to an undefeated Streetsboro squad. West Holmes will have to travel to Lodi to take on the fifth seed, with state title aspirations in tow.

Despite the hard running of Brody Rauch, Claymont fell to 0-7 this season after opting out of the playoffs.

The Mustangs hit the road to the southwest to take on the Tornadoes, getting one of the best offensive performances of the year out of Rauch, who churned out 249 yards on 43 carries for two touchdowns. He also added a catch for seven yards, making both of his extra-point attempts.

However, even with forcing four West Muskingum turnovers, Claymont fell victim to a passing offense that capitalized on a mismatch in the passing game, with quarterback Harley Hopkins throwing for 200 yards and two touchdowns, while also running in a pair of touchdowns.

Claymont converted three of their 10 third-down attempts, eventually seeing the game put away on a late touchdown run from Jacob Epling.

Quarterback Graydon Mooneyham went 7-for-14 for 55 yards with two picks, connecting with Bryce Murray and C.J. Watters for a combined five completions for 44 yards.

The Mustangs are expected to schedule other outside games with other teams that have opted out of the playoffs or have since been eliminated.

The Tuscarawas Central Catholic Saints still have a few more games to play this season, but their playoff run sputtered in the first round.

Traveling east to take on Toronto, TCC trailed 20-0 at halftime, after Red Knights’ running back Garrett Dozier punched in three touchdown runs. On 21 carries, Dozier accounted for 179 yards, by far and away the most yards of any player in this one.

Toronto racked up 415 yards, dictating pace of play and controlling the line of scrimmage to the tune of six yards per play, holding the ball for almost 30 minutes.

The Saints did not have much offense Friday, with quarterback Tobi Grossi finishing 10-for-27 for 114 yards passing and 39 yards on 18 carries with one score.

Ben Martin put his team on the board with a pick-6 in the fourth quarter, before the Grossi 34-yard scamper rounded out the scoring.

The Saints are expected to make up their previously postponed contest against the Strasburg Tigers, along with other potential matchups.