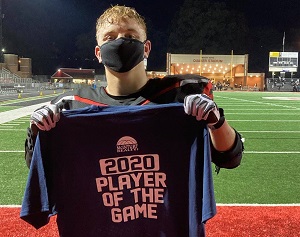 The regular season is gone, and Rivalry Week is already a distant memory.

In true Dover and New Philadelphia fashion, things came down to the wire, while Ridgewood stands alone as the IVC champion.

Indian Valley continued their winning ways against Claymont, with statement wins for both Carrollton and West Holmes helping round out the slate.

It’s already playoff time, but let’s put a bow on the 2020 regular season before we get to that.

Weekly Roundup brought to you by Parkway Quick Lane.

Living up to the yearly hype, the 117th meeting between two bitter rivals came down to the final drive, after New Philadelphia’s early lead.

Senior running back and linebacker Logan Ortt for the Quakers atoned for two fumbles Friday night, punching in a pair of touchdowns to the tune of 121 yards on 23 carries. Ortt was a menace on defense, helping command the New Phila defense and hold off a late charge by Dover.

The win breaks a two-game losing streak for the Quakers, who still trail in the all-time series 57-51-9.

Reise Meechan added 61 yards on 16 carries, with quarterback Caden O’Neill connecting four of five times, all with Caden Richmond, for 87 yards and a touchdown.

Credit where credit is due with the Tornadoes, trailing 21-0, head coach Dan Ifft made things interesting. Quarterback Ayden Hall threw for over 300 yards while completing 31 of his 49 passes, but was kept out of the end zone, throwing a costly interception to boot.

Then again, this is Dover against their biggest rival. You can never count them out.

A trick play in the fourth saw T.C. Molk take a reverse that he threw back to Hall for a touchdown, before running back Connor McGarry punched one through with 4:31 left to make it 21-13.

New Philadelphia milked the clock under a minute, missing a 48-yard field goal from Elliott Warner that could not have missed by more than an inch. Defensive lineman Mitchell Stokey ended the night as a hero, busting through the Dover defensive line, dragging down Hall to seal the deal.

Bragging rights for the year head back to New Philadelphia, with all focus shifted to the playoffs, even with a bye week to start the tournament for the Quakers. Dover, meanwhile, ends the year 2-4, but still earns a home game, set to take on Tallmadge next week.

There is no challenge the Ridgewood Generals have faced this year that has been too great, and they proved that easily to become the IVC champion.

Quarterback Gabe Tingle’s passing was “off” a bit Friday, throwing two interceptions. But that was far from enough for Garaway to pull off the upset.

Tingle led all ball carriers with 128 yards on the ground on 19 carries with a touchdown. Deontae Brandon put in work out of the backfield, notching 11 carries for 65 yards and three scores.

Offense was not the key for the Generals, whose frightening defensive line consisting of Zach and Bryce Prater, Kadin Bradford and J.J. Durr absolutely shut down the Pirates.

Garaway gained just 87 net yards on 35 plays, with quarterback Garrett Newsome going 2-for-11 for 31 yards and two picks. An offense that normally paces the game held the ball for just 18 minutes, earning five first downs and finished the game with only drives that ended in plus territory.

Can the Generals keep their unbeaten streak and make a deep run in the playoffs after John Slusser’s 20th IVC crown? Time will tell after a first-round bye, followed by a showdown with the winner of Oak Hill and Pomeroy Meigs.

The Knights fought back from a 14-0 deficit to rattle off 35 straight, thanks to senior quarterback Peyton McKinney. The unquestioned Player of the Week completed 29 passes, tying a school record, earning three passing and two rushing touchdowns, garnering 282 total yards.

It was a fitting regular season sendoff for the big signal caller, who celebrated his 18th birthday Friday after having his junior season cut short by a torn ACL and a grueling rehab process.

With the win, West Holmes improved to 4-2, after playing some of the best the state has to offer.

Heach coach Zach Gardner quipped he and the rest of the Knights are playing with a chip on their shoulder, with many believing Ashland could run away with their sixth win this year Friday. It’s that kind of outside noise that drives an in-your-face offensive and defensive approach.

Tucker Kauffman continued his workman-like season, nabbing a touchdown reception with Brayden Myers hauling in his own score. Garrett Eastep wrapped up a nice night with an interception, along with a touchdown that helped put the Arrows away with under five minutes left.

Believe it or not, depending on the results of a Wooster and Ashland game that could be played after the season, the Knights could still wind up with a share of the OCC title.

West Holmes will play in the first round of the playoffs against the 0-6 Madison Comprehensive Rams, a team they decimated 63-0 in Week 2.

For the seventh time in eight years, Indian Valley picked up a win against their rival from just down the highway.

The Braves used their hard-nosed running for the second-straight week, even with injuries along the offensive line and at some skill positions. Andrix Bowersox blew past the Mustang defense for 164 yards on 15 carries for two touchdowns, averaging just under 11 yards per carry. Fullback Kent Schupbach found the end zone twice on six carries for 29 yards.

Trevor Myers had a complete game, intercepting two passes, one of which he returned 48 yards for a score, while pounding in a touchdown run and leading all players with three receptions for 58 yards. Junior Rylan Merten earned an interception as well.

The Braves outgained the Mustangs 399-184, and will need their gritty game in the trenches again when they take on Indian Creek in the first round, a team they were initially scheduled to play in the regular season.

The Cardinals and quarterback Cam Blair don’t want to hear about their two losses this year anymore, putting that chapter behind them with a dominating night Friday.

Blair was about as perfect as a player can be, going 11-for-12 passing for 261 yards and five passing touchdowns, along with five carries for 101 yards and a score, although that total was likely more. Blair’s favorite targets were Mason Tucci, DeAndre Fears and Demetrius Evans, who combined for nine receptions for 237 yards. Tucci had two touchdowns, with Evans adding his own, and Fears scampering 85 yards on a go-route.

Elijah Rice earned a touchdown catch as well, while freshman Chad Davis started at middle linebacker on defense, even getting the chance to tote the rock a few times, turning that into a touchdown with four broken tackles along the way.

The Trojans were guilty of five turnovers, including interceptions for Tanner Phillips and Cole Clements. Clements, who entered the game late, connected with Beau Wolfe on a touchdown on the final play of regulation, while running back Tristan Tesch powered in on the ground for an early score that brought Tusky Valley within a score with under four minutes to go in the fourth.

It’s not far to say Sandy Valley ran up the score, especially when things were working so well by halftime, leading 48-7. Instead, it should be viewed as the potential Brian Gamble’s team has when they are firing on all cylinders.

The Cardinals just miss out on a first-round bye, and will meet Tuslaw at home next Friday.

Turnovers plagued the Rockets from the start, putting them in a deep hole they were not able to climb from.

In the first quarter alone, the Indians put 14 points on the board off of two forced turnovers.

The Rockets started off the second half on the right foot, as Reese Peters scoped up a Caldwell fumble. The offense sputtered again, failing to capitalize on the ensuing drive.

Quarterback Evan Rice linked up with Garson Imes from 25 yards away for the lone Conotton Valley score in the fourth.

Rice carried the ball 11 times for 44 yards, completing 12 of his 20 passes for 97 yards, but also surrendering a pick. Ethan Mauge had nine rushes for 46 yards.

Caldwell seemed one step ahead, scoring on short-yardage runs and a third quarter 45-yard strike that put the game on ice early.

The Rockets get a chance to regroup with Portsmouth Notre Dame in the playoffs.

It’s simply amazing to see the difference in the Carrollton Warriors from 2019 to 2020.

Carrollton has bulldozed its way to 4-2 this season, who only suffered defeats to Salem in a heartbreaking 29-28 loss and to eventual EBC champion West Branch.

Sophomore running back Chase Oehlstrom has put the conference on notice for the rest of his career, rounding out 2020 with an outstanding 184-yard performance on 16 carries with two touchdowns. His output rushing opened up passing opportunities, with quarterback Luke Warner going 9-for-14 for 123 yards and two touchdowns. Austin Colletti had five catches for 85 yards and a touchdown, while Brock Smith contributed two receptions for 25 yards and a touchdown.

Colletti also balled out on defense with two interceptions and two tackles, with Smith adding a pick of his own and a tackle.

The Warriors limited the Bobcats to 119 yards, reeling off five sacks. Those went to Josh Knipp, Justin Naylor and Ben Zinda.

Carrollton is chomping at the bit to get to the first week of the playoffs, with winless Bexley just ahead.