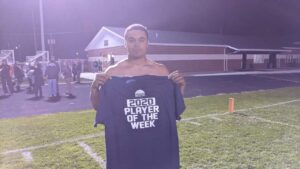 Unfortunately, at the end of every high school football season, there can only stand one champion above the rest.

For the New Philadelphia Quakers, Garaway Pirates and West Holmes Knights, that quest to be the last team standing came to an abrupt end Friday night.

One last squad remains from the area, with the Ridgewood Generals standing tall in the face of adversity,

Join us for another weekend of high school football action, and another round of playoffs, brought to you by Parkway Quick Lane.

On the opening drive, Ridgewood attempted a rollout with quarterback Gabe Tingle to his left, which was quickly snuffed out by the Wheelersburg defense. Trapped by the defensive end, a second defender swarmed in from Tingle’s back, leaping on his shoulders and driving him hard to the field.

The junior quarterback was able to exit to the sideline himself, but the damage had been done. There’s no use speculating the extent of his injury until x-rays are done, but a blindside hit and a 275-pound lineman forcing a shoulder into the turf usually means bad things.

Head coach John Slusser did note it was a collarbone issue for his star quarterback following the game, but no update was available as to the extent.

Even with a potentially fractured bone in his non-throwing shoulder, Tingle still took the field sporadically, eventually tossing what would become the game-winning touchdown and helping lead the Generals’ offense from the sideline.

The real hero of the night, however, was running back Deontae Brandon. With his starting signal caller sidelined, Brandon picked off a Jake Gregg pass and returned it to the red zone, before capping off the drive with a short touchdown run. Did we mention he also snagged that Tingle touchdown pass with one hand before scampering into the end zone through the defense?

Defensively, Ridgewood found a way to keep the Pirates out of the end zone, apart from a fourth quarter run after a turnover. Brandon’s interception, along with the pass rush ability of Kadin Bradford, J.J. Durr and both Zach and Bryce Prater made all the difference.

Dalton Patterson rounded out the night with Wheelersburg pushing towards the end zone, locking in on Gregg’s eyes and jumping in front of a receiver on fourth down, picking off the pass and dropping to the ground.

Ridgewood will naturally be anxiously awaiting word on the status of Tingle moving forward, with familiar foe Ironton up next.

Following the conclusion of Friday night’s game North towards Lake Erie, it’s easy to see why Chardon is such a feared Division III team. Boasting a rushing attack that would even make the Steubenville Big Red blush, the Hilltoppers controlled the contest from whistle to whistle.

New Philadelphia found out quickly how difficult it is to slow the Chardon Wing-T rushing attack, finding themselves on the wrong side of the scoreboard early before coming up short on their only real scoring attempt for a touchdown.

Quarterback Kaden O’Neill was on his horse for most of the night, at the mercy of the Chardon front-seven. That, paired with the fact that the rushing attack that was normally so potent for the Quakers lacked any real punch up the middle, and head coach Matt Dennison’s team was staring at a goose egg by the time things wrapped up.

Believe it or not, 31 is the lowest total put on the board by Chardon this season. Friday night was their second shutout of the year.

On the ground, New Phila put forth just 39 yards to Chardon’s 307, most of which came from James Pettyjohn [177]. All told, the Quakers could only muster 10 first downs and 158 total yards.

West Holmes showed time and time again this season why no one should ever count them out.

Albeit in a loss, Friday night against Tiffin Columbian was no different. Entering the game as the 12th seed against the one seed, West Holmes went blow for blow with their opponents, even with four turnovers for quarterback Peyton McKinney.

The senior was still able to connect on three touchdown passes and keep the game close, with his favorite Target unsurprisingly being Brady Taylor, but Tiffin seemed to stay just one step ahead throughout.

As the Knights found themselves down by three and forced to punt with under 5 minutes left deep in their own territory, they lined up for McKinney to quickly launch a pooch punt. However, the Tornadoes called a timeout quickly, apparently unhappy with their alignment.

That timeout proved to be more vital than they thought, as a low snap for West Holmes resulted in a blocked punt, setting up a short touchdown run. In a game full of mistakes from both sides, it was the one final slip up for West Holmes that ended up sealing the deal.

Tiffin accounted for three turnovers themselves, but outgained West Holmes 404-338.

A severe lack of a rushing attack, with sophomore Bret Shearer gaining just 28 yards on 11 carries, was another issue that showed through in black and white by the end of the evening.

After reaching the second quarter deadlocked at zero, things got out of hand rather quickly for the Pirates.

Overpowered by the Kirtland rushing attack, Garaway allowed 29-unanswered points after connecting on a 51-yard strike from Garrett Newsome to J.D. Young.

That lone score from a team used to putting up north of 35 points per game is a testament to just how good the Hornets are.

Newsome threw for 162 yards, while also leading the team with 46 yards rushing. As a stark contrast, Kirtland completed just one pass on two attempts, albeit for a 43-yard score, while pounding the rock 41 times for just over 300 yards, spread across nine different players.

Alexander Roden earned an interception, while Garrett Hershberger put forth one of his best nights, picking up 12 tackles.

Although a disappointing way to end their playoff run, the Pirates showed all the way to the final whistle why they were one of the best in D. V.

Fairless has put together some rather impressive offensive clinics this season, much like they did in a regular season contest with Tuskegee Valley Friday.

The Falcons, led by breakneck speed out of the backfield, popped out in the front early over the Trojans, and were in the face of Tusky Valley quarterback Tanner Phillips all evening long.

Not much can be said about what went wrong for Fairless in this game, as they forced turnovers, stuffed the middle of the offensive line, found great holes in their own rushing attack, and even connected on some downfield throws. It all shows why this team has been able to pull off six win so far this season.

The lone Trojans score on the night came from running back Tristan Tesch from 25 yards out, but unfortunately for him, his 117 yards on the ground were far from enough.

Phillips was picked off four times, accounting for less than 100 yards and under 50 percent passing.

It was a rather somber end to the senior season of some great athletes to come through Tusky Valley, but still showed the grit and determination they held all year long. To the final whistle, the Trojans kept pushing forward.

Newcomerstown played host to a powerful Danville team, and stayed in contention early on in the night.

Dead-locked at zero, Danville finally pushed through and never looked back.

The same issues that have been a problem for the Trojans this season came back once again, with little time in the passing game and far too much penetration when trying to run the ball up the middle or outside. It is worth noting that Danville traveled to play Newcomerstown and entered with five wins, showing off their defense in most of those.

That defense held Newcomerstown to just 68 total yards, picking off quarterback Logan Hursey twice. On 36 attempts, they netted 17 yards on the ground.

The Trojans, having only played eight games so far this season, could potentially be in line for more contests, but no announcement has been made at this point when they will be rounding out their season.

Indian Valley coming off an impromptu bye week caused by a coronavirus case with an opponent had some moments where they had to knock the rust off, but ultimately the Braves got back in the win column.

Facing MVL foe John Glenn, a team they’ve met in the playoffs before, Indian Valley found themselves struggling early to move the ball down the field. Luckily for them, the Little Muskies had a similar issue, unable to connect on downfield plays and never making much noise in the run game.

One side adjusted, while the other failed to do so.

Indian Valley got two touchdowns from Andrix Bowersox from close range, along with a beautiful throw from freshman quarterback Sam Carter to senior receiver Trevor Myers.

The only time John Glenn found the end zone was on a tipped ball at the line from Carter that ended up in a defender Colt Emerson’s hands, promptly returned over 50 yards for the score. Offensively though, John Glenn looked out of sync, with the quarterback and running back bumping into each other while trying to run read options.

Faithful fans in Gnadenhutten will be happy to see at least a .500 record guaranteed this year. The Braves will round out their season at Carrollton next Friday night.

It’s a disappointing way to see the careers of Cameron Blair, Demetrius Evans, and a whole host of other seniors for Sandy Valley end this way, but in a season that was already so affected by the ongoing virus issue, it ultimately put an end to the Cardinal season.

Around an hour before kickoff against Canton South, news broke that a player had tested positive from their team. Given that finding an opponent and traveling there in an hour is nearly impossible, or at least highly improbable, Sandy Valley ultimately ended the week with no opponent, and chose to finish off their year.

Sandy Valley was hungry to return to the turf after falling to Kirtland 56-28 in the playoffs, but sadly that desire went unfulfilled.

A big congratulations on a great year in Cardinal country from everyone at Big Z Sports.