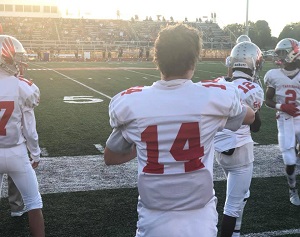 When the dust settled Friday night, all signs pointed to a true grudge match fast approaching in the Inter-Valley Conference.

Plus, New Philadelphia asserted more dominance, roaring off to a 2-0 start that keeps their momentum rolling into Week 3.

Not all area teams left with their records intact, with some rough outings in Tuscarawas County and beyond.

Let’s take a look at what went down on Friday night.

Weekly Roundup brought to you by Parkway Quick Lane

There was plenty of intrigue leading into a battle of two of the best the IVC has to offer, but only one walked away with the bragging rights.

Simply put, the Cardinals were expected to be really good. But good enough to pick apart Indian Valley by 24? That’s the unexpected part.

Senior quarterback Cam Blair put on a performance of the ages with six total touchdowns, four of them coming through the air. The Braves simply had no answer for last year’s BIG Z Sports Player of the Year semifinalist. Connecting with Mason Tucci and Demetrius Evans at will, Sandy Valley put their statement win of 2020 in the books early.

Blair picked up touchdown passes of 67 and 44 yards while pushing in rushing scores of 26 and 41.

Indian Valley was hampered by the loss of senior running back Shane Thorton, knocked out in the Week 1 win against Buckeye Trail with a broken collarbone.

The Braves found the end zone with Mason’s Love arm, connecting with Cole Lancaster and Kolton Thomas, while Kent Schupbach added a score on the ground.

Those bright spots on offense were overshadowed by a brutal Sandy Valley defense, which picked of one of Love’s passes and forced four fumbles, recovering two.

Next week has all the makings of a barnburner, with Ridgewood, the perennial kings of the IVC, just a week away. Playoff football has arrived in Week 3.

Indian Valley will hope to regroup when traveling to Sugarcreek to take on a tough, undefeated Garaway squad.

Cambridge is an improved team, as shown by a victory over Indian Creek in Week 1, but they are still searching for answers against New Philadelphia.

The Quakers forced four turnovers, with two 100-yard rushers in Caden O’Neill and Reise Meechan. The senior running back had two scores, with O’Neill adding two through the air and one on the ground.

Mitchell Stokey was all over the field, notching tackles, sacks, and even touchdown receptions.

Some adjustments could be made by head coach Matt Dennison in the coming weeks in his rush defense, with Bobcats’ Logan Mobelini picking up 137 yards rushing, averaging nearly 10 yards per tote.

The Quakers held a 31-3 halftime lead, putting things on cruise control in the second half.

New Philadelphia travels to Canfield next to try and remain perfect in 2020.

The Trojans came up just short at East Canton, ultimately falling 20-14 after a late score pulled them back to within striking range.

Coach Dirk Gadd will likely be running his squad through their defense leading up to halftime, which allowed a late touchdown pass to put the momentum on the Hornets side with a few ticks left in the first part of the game. That 12-6 midway score proved vital down the stretch.

Newcomerstown struggled through the air after a promising Week 1, with quarterback Logan Hursey going just 3-for-16 for 19 yards. He was also the team’s leading receiver with one reception for 15 yards.

Running back Bladon Garland added nine carries for 76 yards and a score, which made things tight in the last five minutes.

Trenton Newkirk got the Trojans on the board first with a short touchdown run. He finished a quiet night with eight carries for 12 yards, and the abovementioned completion to Hursey.

East Canton was paced by quarterback Chase Vacco, who put together a 100-yard day through the air with a touchdown, while Jake McCullough added 80 yards on the ground with a score.

The Trojans have a tough draw next with the pass-happy Tuscarawas Central Saints rolling into town next Friday.

The Generals locked things into cruise by halftime after amassing a 42-0 mark at halftime, sitting star junior quarterback Gabe Tingle after he put together 187 totals yards and four offensive scores, tacking on a scoop and score as well.

Ridgewood outgained Tusky Valley 362-173, forcing a pair of turnovers and holding the Trojans to just a 1-7 mark on third-down conversions.

Deontae Brandon found the endzone with 78 yards on the ground. Kiegenn Millender had 60 yards himself. Kurtis Varian even pushed across the goal line. It was a complete game in all facets for head coach John Slusser’s team.

Millender hauled in one pass for 75 yards which eventually led to a score, while Varian hauled in a red-zone catch for a touchdown as well.

Tusky Valley’s main offensive production came from Tristan Tesch, who had 21 carries for 89 yards and a touchdown.

All four of quarterback Tanner Phillips’ completions went to Beau Wolf for 88 yards.

Tesch also led the team with eight total tackles, a half a sack and a tackle for loss.

The battle of the best takes place next Friday when Ridgewood meets Sandy Valley.

Tusky Valley has Claymont at home.

Don’t let the three-score deficit foul you. This one was well in reach for the Tornadoes.

Defensive dominated a heated rivalry game in Death Valley, leading to a stalemate of 7-7- heading into the fourth quarter.

Dover showed plenty of defensive firepower with a huge goal-line stuff, before, McShan pushed through the scrum for a score.

A few plays later, however, a poor snap on a Tornado punt gave Steubenville prime scoring position, before McShan pushed through again.

Dover’s lone touchdown came on a 20-yard carry for Jacob Hostetler in the first quarter. He finished with 53 yards on 15 carries.

Dover will now take on Pennsylvania-playoff team South Fayette far away from home.

Another dominating performance down for the Garaway Pirates, with quarterback Garrett Newsome picking up 334 yards and three touchdowns passing, along with 54 yards and two scores on the ground.

The Pirates outgained the Mustangs 488-119, needing just 18-and-a-half minutes to do their offensive damage.

Outside of the mental miscues, and an interception for Newsome, the Pirates were near perfect all evening.

The Mustangs found success in the passing game for most of their yardage, as quarterback Kaedin Presutti completed over half his attempts for 92 yards. Running back Brody Rauch turned eight carries into 27 yards and the lone Claymont score.

Garaway returns to The Hill Friday against Indian Valley, which promises to setoff some fireworks, while Claymont will travel to Tusky Valley.

Things got ugly quick and didn’t get much better throughout the evening, unless you are a Knights fan.

Quarterback Noah Clark showed off his confidence in his offensive line and wide receivers, going 16-for-19 for 204 yards and three touchdowns, along with 45 on the ground.

Garrett Eastep was the clearcut leader from a receiver standpoint, catching 12 balls for 128 yards and two touchdowns.

The highlight of the night easily went to quarterback Peyton McKinney, who is just one year removed from a torn ACL that kept him out for almost the entirety of 2019.

McKinney followed up Clark’s performance with a 7-for-10 passing night for 105 yards and two touchdowns.

The Knights could be the team the beat in the Ohio Cardinal Conference following a quick 2-0 start, bolstered by ferocious defense and a dynamic offense that can score at will.

The road gets a lot bumpier, with Wooster ahead, who just picked up their second win of the year as well.

What is arguably the most inspiring win of the evening, Carrollton knocked off perennial-playoff contender Marlington in stunning fashion.

The Dukes might have set the ton with an early 51-yard touchdown pass, but Warriors’ quarterback Luke Warner would not be silenced, tossing three touchdowns, two of which went to Talen Timberlake. Sophomore Brock Smith pulled off the longest pass play for Carrollton, rumbling 60 yards for a score.

Fellow sophomore Chase Oehlstrom put together his own highlight reel with touchdown runs of 33 and 73 yards, putting a mixture of strength and balance on display.

Marlington played catchup after smith’s long touchdown reception and pulled within eight thanks to a Connor Evanich to Rome Sims connection for 73 yards with under 10 to play, but the Warrior defense held true.

Evanich was on fire all night, going 25-for-48 for just over 300 yards and three touchdowns, but a persistent Carrollton offense refused to surrender the lead.

A team more built on grinding the game away, Jim Tsilimos’ unit racked up over 400 yards, with Warner nearly going for 200 by air.

The key was the bend-but-don’t-break defense, which forced Marlington into 19 third-down situations.

On paper, Carrollton has a real chance of moving to 3-0 when traveling to play the Salem Quakers next Friday

The Rockets were backed by 122 yards and a touchdown for Maddox Walker, but never quite found the edge against the Wildcats.

Quarterback Evan Rice went 7-for-14 for 74 yards and a scoring strike to Garson Imes, but was unable to find deep connections late to forge ahead.

Talon McClurg of the Wildcats pushed his way into the endzone with the clock winding down before Rice connected with Imes.

Edison went winless last season, but have proven early on they could be a legitimate force in the state.

Chops Cottis earned a two-point conversion for the Rockets, who showed sparks in their offense that they hope to carry over to Week 3 against the Steubenville Central Catholic Crusaders on Thursday night.

Derk Hutchinson went off in the Hornets win Friday night, going 11-for-15 for 135 yards and two scores, adding a ridiculous 234 yards rushing.

Strasburg put forth nearly 200 yards of total offense, with an improved night for quarterback Kape Schupbach, who picked up 196 yards and a touchdown through the air.

Tayshaun Curtis was his favorite target, hauling in four catches for 73 yards.

The Tigers drew even in the second quarter before a pair of Hutchinson runs pushed the lead to 20-6 heading into the break.

Schupbach picked up a second-half score, but Hutchinson accounted for two more touchdowns before a silent fourth quarter.

The Strasburg run game that has driven the team for years went cold Friday but will need to get back up to speed again upon their return to home next Friday to meet East Canton.

TCC and Buckeye Trail scheduled to kickoff Saturday at 7 p.m.