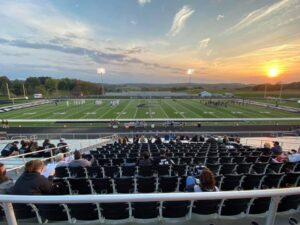 Sandy Valley returned home following their unfortunate golf cart fire that damaged their field, lighting up the scoreboard all night.

It was not all success, however, when it came to area teams in the Ohio High School Athletic Association playoffs in round one, with lopsided tallies ending state title hopes.

Join us for the second part of the Week 1 playoff edition of the Weekly Roundup, brought to you by Parkway Quick Lane.

It’s funny how the stars align sometimes to make everything seem alright.

The Braves and Redskins were slated to meet during the regular season, pre-pandemic of course.

Even after missing that matchup, the story came full circle Saturday night with both sides squaring off in Gnadenhutten. The Braves were the ones leaving the field smiling, ringing the Larry Holmes Victory Bell with pride.

Out-gaining Indian Creek 406-178, Indian Valley pounded the rock all evening, led by Andrix Bowersox, who’s career night of 162 on 19 carries led to two scores. The senior also picked off a pass, putting an exclamation point on what was already an outstanding performance.

Fellow senior Kent Schupbach opened the scoring on a 64-yard touchdown reception from quarterback Mason Love, before bruising his way into the end zone at the close of the first quarter for four yards.

Although the Braves earned 273 yards of 35 carries, the passing game provided a spark as well, with Love’s lone completion leading to the aforementioned score. Freshman Sam Carter was on point, going 5-for-6 for 69 yards in his start, connecting with Love for a touchdown near the end of the third from 36 yards away.

Schupbach led all receivers with 79 yards and three receptions.

A little credit for the kicker, Daniel Miller, as well, who converted all five of his extra point attempts.

Indian Valley moves on and will take the long bus ride to Bloom-Carroll to meet the Bulldogs, a team they are very familiar with. Last season, the Braves fell to their playoff foe 48-39.

You could have never guessed the Sandy Valley turf was damaged by a combustible golf cart just a few weeks ago, with some fine craftsmanship allowing the Cardinals to rip off a dominant performance in the playoffs at home.

Three defensive touchdowns highlighted the night for Sandy Valley, the first coming from Ben Petro, who took an interception back 80 yards for the score.

All told, with Elijah Rice’s 50-yard pick-6 and Chad Davis’ late house call for 46 yards, Sandy Valley had more yards on interception returns than some teams had in total offense.

Quarterback Cam Blair found Demetrius Evans for a 59-yard touchdown and punched in a short-yardage run, with MAson tucci scoring on a fumble recovery in the end zone.

There are seriously too many things to list here the Cardinals did right in terms of scoring, showing off a diverse unit that will carry momentum into round two.

It marks the first time since 2015 Sandy Valley has tasted playoff victory, making it the first postseason win for the Cardinals senior class.

It’s back to the grindstone right after the triumph, with Martins Ferry next.

If you have not heard the name Chase Oehlstrom yet, allow us to introduce you to the sophomore phenom.

He punched his ticket on back-to-back drives, with the coup de grace from 32 yards out, pushing the Warrior lead to 34-0. The team has raved about the ability of Oehlstrom to run downhill and power the offense, a luxury when you consider he’s mastered that ability with two years left in Carrollton.

Austin Colletti opened up the scoring on a 46-yard pick-6. Quarterback Luke Warner pushed through the line for a short touchdown plunge, with Nick Martin brought home the bacon with his own scamper up the gut.

Winning in football comes down to all three parts of the game — offense, defense and special teams.

Zach Martin decided to give the Warriors a W in that column as well, returning a punt 55 yards for a touchdown.

Carrollton has not seen the level of success they have achieved to this point, but their tallest task lies ahead in unbeaten Marion-Franklin, whose three wins come against teams one or even two divisions higher.

It was a rough night for the Strasburg Tigers, but one interesting note came from the Monroe Central sideline, and who was absent.

Head coach Josh Ishy was approved to coach the game from within his vehicle, parked under one of the goal posts away from the playing field, after he was in the same room as a COVID-positive person.

That didn’t slow the Monroe-Central offense, however, who used a grinding rushing attack to jump out to a quick 14-0 nothing below salting the game away with more hard-nosed attempts.

The Tigers did ultimately get on the board late in the fourth quarter.

Head coach Curtis Metzger and company were happy just to get on the field Saturday, following a mandatory quarantine period after the Newcomerstown win, due to possible exposure.

If one was to look at yardage totals from this one, they might be thoroughly confused.

CCC put out 231 yards of total offense, with Tusky Valley close behind at 218, Unfortunately, that’s where the similarities end.

The Trojans and quarterback Tanner Phillips were guilty of four interceptions, three of which eventually led to Crusader points, including two returned for touchdowns.

The Trojans got on the board when Phillips connected with Beau Wolfe in the fourth quarter from 35 yards away.

The Tusky Valley offensive line struggled to hold the point of attack, never fully allowing their quarterback to set up the offense. Runner receiver Tristan Tesch picked up over 80 yards of total offense, nearly split down the middle in receiving and rushing.

While the turnover bug clearly was the difference maker, it’s an important lesson on why records don;t necessarily matter in the playoffs, with most CCC losses coming to powerful teams well above them in terms of division.