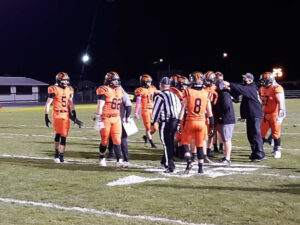 The playoff herd is thinning slowly following Saturday night, with Garaway, Ridgewood and West Holmes moving one step closer to a state crown.

That very same road came to an end for Dover, Sandy Valley and Carrollton in heartbreaking fashion.

Brady Taylor, Garrett Newsome, Gabe Tingle, and a long list of others made their mark to move on to the Sweet 16.

As the playoffs inch closer to a close, join us on another Weekly Roundup, brought to you by Parkway Quick Lane.

It’s one thing to dominate at home in the playoffs. It’s another to drop 60 points on a divisional rival.

Quarterback Garrett Newsome stole the show offensively, going a perfect 8-for-8 for 196 yards and a touchdown, rumbling his way to 129 yards and three scores on the ground.

The Pirates showed off their careful preparations from throughout the week, whether it was a fake tunnel screen turned deep touchdown from Newsome to Zach Bickford, or the crowd-favorite Diesel package dishing out punishing runs up the gut.

Defensively, it wasn’t quite the seven turnover night from last week, but it was more than enough to earn a shutout. Brady Starner, Caleb Miller and Andrew Bunn all tied for the team lead with four tackles.

Alexander Roden and Sam Page logged interceptions, both of which eventually set up another score.

Their 61 points were the most scored since November of last year. Ethan Miller and Wyatt Wallick brought the bacon twice on the ground, while Jaydon Miller put in 93 yards of total offense and one score.

Now comes the real challenge for Garaway, who must travel north to take on Kirtland, who picked apart Sandy Valley 56-28.

Quite possibly the upset of the playoffs to this point, West Holmes came roaring back from a 14-0 halftime deficit to advance.

Much like they have all season long, the Knights found adversity early on, with starting sophomore running back Bret Shearer going down early after just four carries. Head coach Zach Gardner noted this was a re-aggrevation of the same injury that kept Shearer out for three weeks earlier this season.

Nevertheless, even with a rough first half in which he accounted for an interception, just over 60 yards and around a 30 percent completion percentage, quarterback Peyton McKinney finished his evening going 17-for-34 for 330 yards and two touchdowns, adding another on the ground from short range.

Last year’s quarterback Noah Clark came in during the last drive, helping ice the game with a minute left on a short touchdown plunge.

The Knights yielded 388 yards to the Bruins, who flexed a grinding rushing attack, led by Alec Buehner, to complement Sam Ehrbar’s 200 yards and one touchdown passing.

Still, it’s worth noting Buehner has put up multiple games of more than 250 yards, but was limited to 157 on 30 carries, albeit with two touchdowns.

Call it bend-but-don’t-break, or luck, or loss of focus by their opponent. In fact, West Holmes might prefer thought.

The Knights have fully embraced the doubt and what they’ve called “disrespect,” and it’s fueling a memorable playoff run. Another top-5 opponent lies ahead with Columbian Tiffin, the top seed in the Division III, Region 10 bracket.

Another D. III showdown, the spirited run for the Tornadoes reached a dead end in Streetsboro.

The Rockets showed off the speed of Eastern Kentucky commit Richtell McCallister, who cruised in for four touchdowns rushing. Dover simply had zero answer for the fastest player on the turf Saturday.

Taking into consideration that Dover traveled north to face Streetsboro Friday before the game was paused with just under 10 minutes to go in the second, and then completed the long round-trip journey again before a 3:30 p.m. kick, there was plenty not working in their favor.

T.C. Molk got the start again at quarterback after an impressive run at the helm, but much of his time was spent sprinting out of the pocket. His lone score came on the ground, giving Dover the early lead, but he forced an interception and was held well under the 100 yard mark.

Ayden Hall returned to quarterback duties, completing around 50 percent of his passes for just over 100 yards and two touchdowns.

McCallister finished another stunning performance with 21 carries for 310 yards.

Dover still has the possibility to schedule another “regular season” game in the next three weeks, but no word has come out yet as to who that could be, if at all.

The Bulldogs guarded home turf as you would expect, but maybe not with this kind of authority.

Following a drive to midfield after the opening kick, Bloom-Carroll’s bulldozer Hobie Scarberry took a 4th-and-short power right run 55 yards, bouncing off at least three tackles. Following that, some three plays after the ensuing kick, Carrollton attempted to catch the defense off guard on a deep pass up the seam, which ended up as a jump ball in the hands of Beau Wisecarver.

It was just that kind of night.

The interception led to a second Bloom-Carroll touchdown, before the Warriors stalled and punted, yielding another score just moments later. All five of the Bulldogs opening possessions resulted in touchdowns, which was more than enough to earn the win.

Carrollton could not utilize sophomore running back Chase Oehlstrom effectively after finding themselves behind early, putting forth 53 yards on 18 carries.

The Warriors bow out of the playoffs at 6-3, with the chance to play one more game to finish the year.

The Cardinals went down swinging to the very end.

Meeting the top Division V team in the state, Sandy Valley fired back after trailing 14-0 with a Cam Blair to Demetrius Evans connection for 36 yards and a score.

They would wind up finding each other nine times for 151 yards and four touchdowns. But it’s a monumental task keeping up with Kirtland.

That statline added to Blair’s 246 yards, but defensively, the Cardinals had no answer to running back Mason Sullivan. The Hornet ball carrier scored five times on 15 carries with 269 yards. On top of that, quarterback Liam Powers threw for two touchdowns and 119 yards.

Running back had just four carries for four yards, with Blair contributing 35 yards on 10 carries.

Sandy Valley will return home with one more game potentially, while Kirtland meets Garaway in the Sweet 16.

For the first time this season, Ridgewood found themselves trailing. That certainly didn’t last long.

A fumble on the opening kickoff return allowed Liberty Union to punch in an early touchdown. But quarterback Gabe Tingle and company did not let that stand for long.

The junior signal caller flirted with 350 yards of total offense, a statline that could have been much greater according to head coach John Slusser, if a few plays more plays. Regardless, he still brought home two first quarter rushing touchdowns, followed by touchdown passes to Dalton Patterson and Kurtis Varian.

Did we mention a 68-yard punt return for Tingle that would have made Deion Sanders proud? If area football fans did not realize how dominant the junior can be, Saturday should serve as all the evidence they need.

Even with the early lead, all told, Liberty Union gained just a dozen yards against Ridgewood’s starting 11. You read that correctly.

Strange how this is the one moment this year someone could say Ridgewood had to respond to real adversity considering another dominant performance, but it could serve as a valuable lesson learned moving forward with Wheelersburg up next.

Ridgewood gets one more home game this season next Saturday, in what will be, on paper, their biggest challenge to date. Not that any previous challenges have proven to be very sizable obstacles